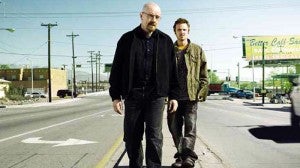 LOS ANGELES—It was so bitingly cold that, on my headphone, I could virtually hear Bryan Cranston shiver. “So cold,” he in fact muttered, as he sat on a bench waiting for the cameras to roll at Civic Plaza in downtown Albuquerque, New Mexico. Several journalists, including myself, were huddled in front of a monitor, watching Bryan shoot this scene for the final season of “Breaking Bad” one afternoon last January.

Winds added to the chill in the air. How unglamorous an actor’s life can sometimes be! Bryan and many extras did take after take out in the bitter cold. Between takes, the three-time Emmy Award best actor (drama) winner put on a hooded parka. A few hours later, the actor, freshly showered, sat down with us for a chat in the warm confines of a hotel suite.

I told Bryan what his costar Aaron Paul (Jesse Pinkman) told me earlier. “No one knows this,” Aaron said, relaxing with a drink after a day’s shoot, “but Bryan never wears pants in close-up shots. He is very proud of what is happening down there and he thinks it is intimidating for all of us, in a loving way. From the belly down, he has nothing on.”

When I asked how he reacted when Bryan first did this, Aaron answered: “I was not surprised. He slowly removed his pants, staring [at me] as he bent down to do it.”

Bryan’s deadpan reaction: “First of all, never believe what Aaron Paul says. I cannot deny or confess that it is true.” But he added: “There are times when levity is very helpful to a group of people. We work long hours. My call time is 5:40 a.m.; we finish at 6 p.m. We are together for a long time. Actors get tired; levity breaks the tension so I look for opportunities. Plus, I love to have a good time.” 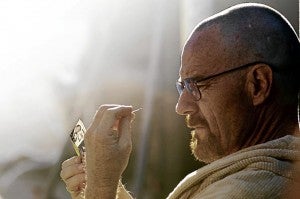 Bryan’s days of dropping trousers in front of Aaron and their costars are numbered. “Breaking Bad,” one of the best shows ever on television, is shooting its fifth and final season. (Followers of the acclaimed series in the Philippines have a few more seasons to look forward to. The riveting show’s third season premieres on April 11, 9 p.m. on Sundance Channel, available on SKY Cable.)

On the New Mexico set, Bryan is admired for his “no bitching” admonition to the cast and crew. “Yes, there are frustrations,” he conceded. “But on my set, nobody is allowed to bitch. It could be about how tiring [the work] is, or not getting a scene right. Or, ‘I have to take a commercial [flight].’ Or, ‘I have to meet a director for dinner.’ Nobody wants to hear that.”

Bryan’s portrayal of Walt White, a cancer-stricken high school chemistry teacher with a drug-world king alter ego, Heisenberg, has won him acclaim. Asked what he would bring home as a memento of the show, Bryan said he would take the black pork pie hat that he wears when his Walt conducts his meth business (with Aaron’s Jesse) under the alias Heisenberg.

“That hat is emblematic—it is a talisman,” he explained. “For Walt to be Heisenberg, he needed the hat. If you are wearing a beautiful gown, we would sit differently because we are wearing a different article of clothing. We behave differently. Same with the hat. Walt behaves differently when he is wearing the hat.”

The actor, who was in the brilliant cast of Ben Affleck’s Oscar- and Golden Globe- winning “Argo,” said he would let series creator Vince Gilligan (writer, producer, director) “end it the way he wants it to end. I am not the lead singer. I am speaking the word. I am getting the lion’s attention but I am not the genius. The genius is Vince.” 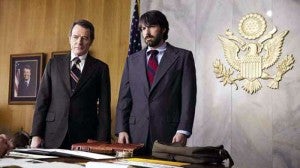 Bryan rattled off what he considers the show’s highlights: “In the first season, [Walt] makes a decision that is the result of retribution. In the second season, if he is going to survive, he needs to be a criminal. In the third season, he embraces who he really he is—he senses that someone is intimidated by him. That is very powerful. When we first met Walt, he could not intimidate anyone.”

Bryan continued: “The fourth season is about getting power and coming out of his ego, making this metamorphosis from good to bad. In Season 5, he is already bad. But there is no clear-cut view. Is he a protagonist or an antagonist? Why can’t he be good and bad?”

No, Bryan hasn’t tried the meth that Heisenberg makes. “I’ve never done the drug,” Bryan stressed. “I never had the desire. My high is my work. That is my drug. But others are not so lucky. Meth destroys lives. The drug that we are dealing is the condition of the subject. It is not really about the drug but what happens to this man. Can you imagine if the drug was marijuana? People won’t be caring so much.”

Riffing on the show’s title, Bryan said: “People make the decision to be breaking bad. It’s human nature. A person’s character is [molded by] the decisions he makes. I find a wallet with $300—will I take the wallet?” 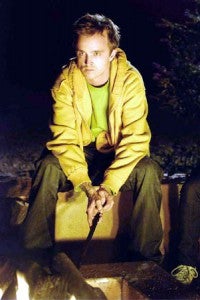 Looking back on his decision to play one of the CIA agents who plot the rescue of six American embassy staffers in “Argo,” Bryan said he was attracted to the “good” story. “I don’t need to work again,” he said. “But I love to work. The only reason for me to work is if I am passionate about it. I read ‘Argo’ and said, ‘Wow, what a story. I want to do this.’ I met with Ben and said, ‘Yes, let us do it.’ Nobody connected with that film thought it was going to be an Oscar contender. Nobody said that. We just focused on making our film. Classic films do not emanate from the people who watch it but from those who do it.”

Bryan added his own practical wisdom that guides his personal and professional life: “Focus on what you can do. F**k everything else. You cannot control it. It does not mean anything; it does not create work. Does it stimulate conversation? I don’t like gossip. Gossip can only hurt.”

Looking ahead of his post-“Breaking Bad” career, Bryan said: “I have no intention to top it (‘Breaking Bad’). I will never have a role better than Walt White. It is a role that any actor will be envious about. Who has a playground like that? I got trophies and accolades. I am overwhelmed.”