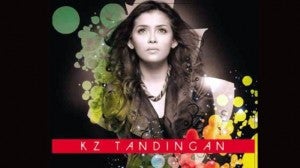 KZ Tandingan, in my eyes, is one of the best newcomers in OPM lately. Even though she came from a search reality show, in due time, I believe music aficionados would know her more for her singing ability rather than for how she initially got nationwide attention.

Why? To be brutally honest here, there is a notion and a common belief that when you come from a search reality show, the tendency is that you would soon be forgotten and overshadowed by the next champion of the next season–that is, if there would be a new season for that said search reality show.

The advantage that KZ enjoys is that she will always be remembered as the first champion of the TV show ‘The X-Factor’ in the Philippines.

But as I listened to her self-titled debut album, the first thought that crossed my mind is not that she is the grand winner of a search reality show but that I am listening to a young and very talented singer, period.

In the long run, I see a deeper implication in this in that she can not be viewed anymore as a product of a search reality show but someone who will definitely be able to hold her own as a credible talent who has not even reached her prime yet. Imagine what she could become years from now!

I have seen past winners of numerous shows of the same format who could not shake off being “tagged” simply as a search reality show winner. And what have happened to their careers now? Do we even remember any of them these days? Where are they now?

Unbeknownst to them, they had fallen into some pitfall. This “trap” I am hoping KZ Tandingan would not find herself in because it would be such a shame if someone as talented as her would also be forgotten over time.

That is why KZ has to be able to carve a niche for herself and establish her own identity real soon.

I am hoping that her second single “Un-Love You”— which she was able to sing with such dramatic passion that she gave more meaning and depth to the song beyond its lyrics with her incredible vocal “calisthenics”— will help cement her firm foothold in the industry.

Because the “attention span” of music aficionados now–or even their “loyalty”–are not as focused or even as patient as before. Lately, the tendency is for music fans to gravitate towards what is trendy and they quickly forget substance over style.

I hope KZ Tandingan does not fall in a category of being a trend. There is definitely more to this girl than being a grand winner of a search reality show.

She is one bright rising star !