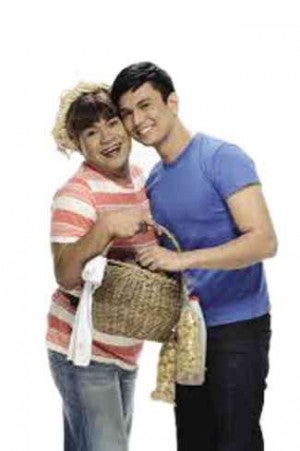 JOEY Paras (left) and Tom Rodriguez: Despite the snags, “Bekikang” is still worth watching.

Another major distraction is the introduction of predictable kontrabida characters, as well as the skittish and nervous performance of Tom Rodriguez as the handsome but feckless love of Bekikang’s life. It’s a good thing that Paras’ sidekicks are around to help keep the giggles going, and Tirso Cruz III’s portrayal of his “understanding” father is another plus point.

On Paras’ part, he comes up with an entertaining but still focused and felt depiction of the film’s  fey, gay protagonist, getting on viewers’ good side  by working so hard and being indomitable and “unsinkable” even when life deals him some really bad cards.

After a while, however, even Paras’ stellar portrayal evinces signs of wear and tear, because it’s generally too consistently upbeat to be believed, or fully empathized with.

A major plot twist is the decision of Rodriguez’s character to leave his and Carla Humphries’ love child in Bekikang’s love and care while they make their fortune abroad. Expectedly, Bekikang goes completely gaga and bonkers over his “foundling,” so when the by then wealthy couple return and force him to give up the beautiful boy, Bekikang unravels!

That’s acceptable and believable, but what isn’t is the final plot twist that has the precious boy “accidentally” drowning in a conveniently available tub of water which results in his having to fight desperately for his life—thus forcing his three parents to finally make peace with each other.

How facile can a flick’s denouement get?

Due to these and other snags and quibbles, Paras’ stellar bid is not the overwhelming success it was meant to be. But his launching vehicle is occasionally diverting and crisply staged and performed, so it’s still worth viewing.

In addition, it sometimes presents a more enlightened view of the alternative gay lifestyle, especially as reflected by the attitude of Bekikang’s father—and even more to the point, by that of the foundling whom Beki has taught well, and loved.

On point of performances, aside from Paras and Cruz, the cast member who stands out, in our view, is Nikki Valdez, who plays the protagonist’s only female sidekick.

The actress is known for her effectively light-hearted portrayals, but in this movie, she’s given the more challenging task of convincingly depicting a girl who secretly loves her best friend, despite the fact that he not only loves somebody else, but is a card-carrying gay caballero!

In the hands of a lesser actress, the character would have come off as impossibly ludicrous and ridiculously stupid, but Valdez is able to make her pathos, pain and love believable—and that is no mean feat.

We deeply regret the fact that the actress, who’s also a very good singer, wasn’t made to participate much more in that sorry “Balut” “production” number, which she could have saved. Well, no use crying over spilled milk—and broken eggshells.

Read Next
KZ Tandingan: A bright rising star
EDITORS' PICK
Experience clearer calls nationwide with Smart VoLTE
Tracing app pesters MRT commuters
New Year, New Rediscoveries
Senate probe foils vaccine overpricing
Editorial: Unusual haste
Driving can be even more rewarding this New Year — here’s why
MOST READ
Duterte to firms: No franchise until you settle your accounts with gov’t
7 copassengers of UK variant patient can’t be traced
Norway advises caution in use of Pfizer vaccine for the most frail
#DefendUP trends after DND scraps agreement with UP
Don't miss out on the latest news and information.