Meryl Streep from ‘August: Osage County’ and ‘Into the Woods’ 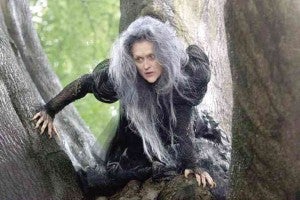 MERYL Streep as The Witch in “Into the Woods.”

LOS ANGELES—Filming “Into the Woods” in London and promoting “August: Osage County” was putting Meryl Streep in two conflicting moods. “I feel like I should have two heads because I’m so into this music, place, magic that’s ‘Into the Woods,’” said the world’s preeminent actress with a lilt in her voice, exulting in her experience so far in playing The Witch in director Rob Marshall’s adaptation of Stephen Sondheim’s musical. She is dressed all in black for this early evening interview at The May Fair Hotel in London.

In “August,” coincidentally another adaptation of a play (by Tracy Letts who won a Pulitzer Prize for this), Meryl plays Violet Weston, the acid-tongued, pill-popping matriarch of a bickering family in Oklahoma.

In the next breath, Meryl remarked, “I’m also in a very dark place with violence with ‘August’ so one bleeds into the other. I keep thinking…” And here she sang and paraphrased some of the lyrics of “Children Will Listen” from “Into the Woods”: “Careful of what you say, children will listen because that’s the story of ‘August’/Careful of what you do, children will see and learn.” How often does one have the pleasure of hearing Meryl Streep singing in person?

The actress, who said “Send in the Clowns” is her favorite Sondheim song, talked about a metamorphosis in “Into the Woods”: “The metamorphosis in ‘Into the Woods’ is [of] a witch who sets the whole machinery of impossible tasks in motion so she can have her wish, which is to not be ugly. Her mother put a curse on her. It’s very like Violet. Her mother put a curse of ugliness on her because somebody stole the beans, the baker’s father.

“So her metamorphosis is that Rapunzel, [whom] she loves more than anything in the world, will love her because she’ll be beautiful. Of course, women think that if they’re beautiful, they will be loved. The thing is, you can get your wish and Rapunzel will still hate you. It’s such an interesting problem that Sondheim sets up. Everybody has a wish, everybody gets their wish. That’s just the end of the first act. Afterward, what happens after it all shakes down…it’s an ambitious thing.”

Asked what her wish was, Meryl said with a laugh, “Oh, sleep for 12 hours.”

Meryl admitted that at first she was “not eager to do this part” in “August,” which is directed by John Wells and features a formidable cast—Julia Roberts, Ewan McGregor, Benedict Cumberbatch, Chris Cooper, Juliette Lewis, Abigail Breslin, Dermot Mulroney, Sam Shepard and Misty Upham.

“The reason I did was [that] a very dear friend said to me, ‘You had a great mother. She gave you your appetite for experience, curiosity, sense of humor. Your mother sang in the kitchen and mine hit me. Your mother made you feel you could do anything. Mine made me feel like I couldn’t do anything. You have to do this for me and for all the girls like me who had bad mothers, who made it in spite of that, who got out, and for all the ones who didn’t and to let them know it’s OK to leave that behind.’

“She really made a case. I thought, OK, because when you’re a young actor, you think, oh yeah, it’ll be so cool to imagine having cancer and what’s it like to be close to death and then your family hates you…I really want to take that all on.

“When you’re older and things happen to you, you bleed more easily. It costs more to go into that territory. You just don’t want to…but, I thought, I am going to do that for my friend because it made sense to me. Once I said yes, this cast was assembled. It’s a gorgeous ensemble. Then I thought, what’s it worth risking everything to go to this territory where you will be loathed. But it’s OK because some people’s wounds are so toxic that they cannot help but take it out on everybody else. They can’t stop themselves. Add drugs, illness, depression to it and it’s just….”

Meryl shared her reaction when she first saw the Broadway production of “August” which starred Deanna Dunagan as Violet. “She was wonderful,” Meryl said.

“I saw the play about eight years ago, I think. Three and a half hours flew by. It was so densely packed with action and speaking, you had to catch every word. It was amazing. When they announced that they were going to make a film of this play, I thought, it would be difficult to bring it to a film time. They’d have to take an hour out of it [and] introduce Oklahoma as a character. John Wells did a great job with that.

“Inevitably, things are lost. We all came to the first reading with a copy of the script of the play because we all had our favorite pieces that we wanted to go back to. But it’s not possible so it’s sort of reduced in its scope but it’s complete. John got the story he wanted to tell.”

The film’s centerpiece is a dinner scene, an explosive one full of blistering dialogue. “We didn’t rehearse for a long time but we shot it for a long time, as I recall,” Meryl recalled. “It felt like several circles of hell to shoot. That’s a very heightened dinner but I’ve been at family events where everybody comes pretty well stoked for the encounter with 20 years of resentments. If somebody says one word wrong, ‘I’m going to give it to her.’ That’s the way things sometimes happen at family events when it’s emotional.”

Meryl explained how she helped come up with the look of Violet, who is cancer-stricken. “Women obsess about their hair,” she began. “They’re worried about it from adolescence. In many cultures, it’s something that maybe does define a woman in her own eyes. I hadn’t thought about this.

“With Violet, I did decide early on that mouth cancer, which is a pretty horrible thing and the chemotherapy that she was just going to finish up would have taken her hair. I thought that 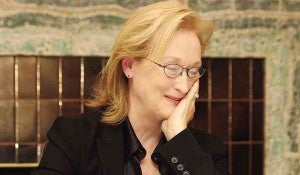 STREEP: One scene, to her, “felt like several circles of hell to shoot.” RUBEN NEPALES

was important because she was so filled with self-loathing that if she needed another reason to despise what she looked at in the mirror, there it was.

“I thought that her affection for Elizabeth Taylor would lead her to choose a wig that is sort of her idea of Elizabeth Taylor. I tried to choose a wig that was readily available at Kmart so it would just pull on. It was a net thing, similar enough in style to her sister’s hair that I would feel we would resemble each other enough to feel like sisters. I felt that the first time you saw her, you should never forget what the course of her suffering is.”

Meryl admitted that amid the histrionics, Chris Cooper stands out in one scene. “The warm, beating heart of the movie is when Chris Cooper gets with his son and defends him to his mother.”