Hemsworth back as Thor but won’t be type-cast 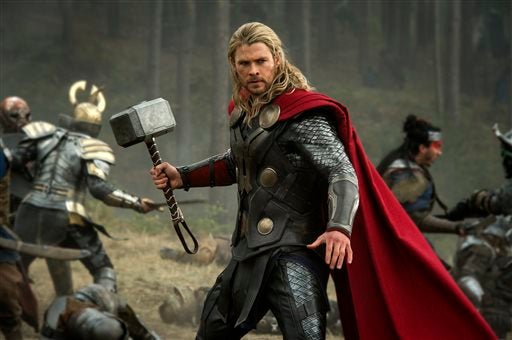 This publicity photo released by Walt Disney Studios and Marvel shows Chris Hemsworth in a scene from “Thor: The Dark World.” AP

BEVERLY HILLS, California — On the screen, Chris Hemsworth battles aliens as superhero Thor. But this day, his wounds are of the domestic variety.

“I was trying to grate ginger,” said the 30-year-old actor, holding up his right hand to display bandaged fingers. “The grater came apart, so I was positioning the blades back in and cut my fingers. I wish I could say I was rescuing some old lady who was being robbed. But, really, I was just cooking in the kitchen.”

In-person, Hemsworth’s robust frame is impressive. But, he’s not as massive as he appears on film.

“I don’t naturally sit at that weight,” he said of his on-screen appearance. “I spend four or five months eating protein and lifting weights. Then I spend months getting rid of it.”

His routine has definitely paid off. Overseas, Disney’s “Thor: The Dark World” earned a summer blockbuster-like $109.4 million when it opened overseas last weekend. On Friday, the Marvel sequel hit domestic theaters, with predictions it could earn more than $95 million in North America alone, toppling “Ender’s Game” from its No. 1 box-office spot.

“Each time these films continue to work — whether it be ‘Captain America,’ ‘Iron Man,’ or ‘Avengers’ — you think, ‘Oh god!’ You don’t want to drop the ball,” said Hemsworth. (Collectively, the Marvel Studios film franchises have made more than $12 billion worldwide). “I couldn’t be happier,” he added.

Contractually bound to one more “Thor” film and two more “Avengers” movies, Hemsworth will continue to reprise his role as the hammer-wielding hero.

“I’d do them for as long as they will have me,” he said. “I love being a part of this crazy ride that Marvel has set us all on. It’s opened up so many doors for me.” 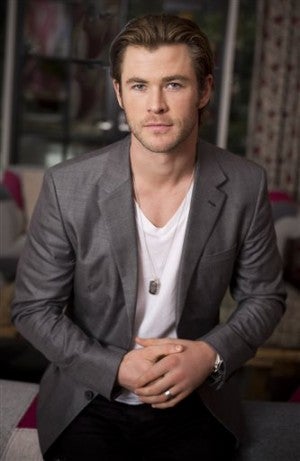 Australian actor and star, Chris Hemsworth of “Thor: The Dark World,” poses for a portrait, in New York. Overseas, Disney’s movie earned an impressive $109.4 million when it opened internationally last weekend. The Marvel sequel releases in theaters in the US on Friday, Nov. 8, 2013. AP

In September, Hemsworth starred as Formula One racer James Hunt in the Ron Howard-directed “Rush.” The film — a box-office disappointment, in contrast to Hemsworth’s superhero movies — marked a new chapter in his movie career.

“‘Rush’ was a far more intimate setting,” the actor said in a recent interview as he tucked a few loose dirty-blond strands of hair under his fisherman hat. “All of the focus is on the story and the characters. You’re not competing with special effects and big stunts.”

Hemsworth’s work in “Rush” led to another role in a Howard picture: The upcoming “Heart of the Sea.” The period adventure film, based on the true events that inspired Herman Melville’s “Moby-Dick,” is currently filming in London.

“Chris won the James Hunt role in a self-made audition that immediately demonstrated he had the range to capture the qualities of a complex character,” Howard said in an email to The Associated Press. “He has great instincts and the intelligence and talent to get his ideas onto the screen — and he’s a blast to work with. We’re halfway through ‘Heart of the Sea’ and its clear Chris is generating another strong performance.”

Hemsworth will also star as a cyber-guru in an upcoming, not-yet-titled Michael Mann thriller. “Chris is ambitious and uninhibited,” said Mann in an email. “He’s artistically down for the cause. He’s there for you. I had been told that by Ron Howard.”

When preparing for the role in Mann’s film, Hemsworth took computer lessons for two and a half months. “I couldn’t be more inept in mathematics and computers,” he said, adding with a chuckle, “It was quite a steep hill to climb for me.”

Luckily, Hemsworth is always game for a challenge — even if it means taking a pay cut to tackle meatier roles. “Look, it’s great to earn money,” says the actor, who has a 17-month-old daughter, India Rose, with wife Elsa Pataky. “But it’s not why I got into it. There are obvious great bonuses financially, but I don’t pick roles on that. You can’t. If you do it’s a short-lived career and you end up in one type of thing.”

Back in 2007, when Hemsworth moved to Los Angeles from his native Australia, his goal was to conquer Hollywood. But he had to struggle to find an audience.

“There was a period of about eight months where I wasn’t working and I was pretty close to going back home,” said the actor, who’s also worked as a bartender. “I was sick of having the door slammed in my face and feeling like I wasn’t good enough. But, I knew I loved storytelling and movies. There was nothing else I really wanted to do.”

Luckily, appearing in 2009’s “Star Trek” helped him get noticed. “It was such a small role, but Kenneth Branagh saw it and cast me in ‘Thor,'” Hemsworth said.

The actor’s 23-year-old brother, Liam, who stars in the upcoming “The Hunger Games: Catching Fire,” also auditioned for the part. “But, they said he was a little bit young,” said Hemsworth. “Then my manager was like, ‘Well, he’s got an older brother.’ So, if anything, Liam got me in there. It was a team effort. We are competitive, but not in this business. There are too many variables you cannot control.”

Despite his success in Hollywood, Hemsworth still fights anxiety on “every set I step on,” he says. “I can’t help but think, ‘Do I have a handle on this? Am I going to be able to make this truthful?’ But I like that question mark. It keeps you alive. There is a danger to becoming too comfortable.”

Thor takes a hit for womankind

What to Expect from Characters of “Thor: The Dark World”