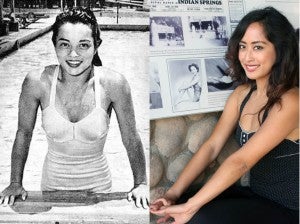 SAN FRANCISCO—An Oscar-nominated and Sundance award-winning British filmmaker will be working on a biographical film about Victoria Manalo Draves, the Filipino-American who was the first Asian-American to win Olympic gold medals for the United States.

Manalo Draves overcame challenges such as racial discrimination and a fear of heights even as she trained and eventually won two gold medals in diving.

Los Angeles-based independent filmmaker Georgina Tolentino https://www.facebook.com/VickiManaloFilm?notif_t=fbpage_fan_invite declined to name the Oscar-nominated director-writer due to confidentiality issues at this stage of the project.

She revealed, however, that the British director-writer of the forthcoming film is up for a second nomination in the coming Oscar season. Tolentino will be producing the biopic under her own production company, Icarus Film Studios.

Tolentino, who is also an actress, is launching a Kickstarter campaign in November to raise funds for the writing of the script. She will play Manalo Draves in the biopic.

She has been researching Manalo Draves’ life story for more than a year, and has been learning to dive from coaches who have a connection to the Filipino-American Olympic medalist.

During the ceremony, West Bay executive director Rudy Asercion, San Francisco supervisor Jane Kim and AARP California state associate director Ahnileen Martinez unveiled a plaque that describes Manalo Draves’ achievements as the first Asian-American and Filipina to win gold medals for the US, during the Summer Olympics of 1948.

The plaque was installed at a park named after Manalo Draves, the only one in the United States named after a Filipino woman.

West Bay, with the help of AARP, spearheaded the installation of the commemorative plaque at the park as part of celebrations of Filipino American History Month.

“We need to create heroes and role models for Filipino children who are here in the United States,” said Asercion. “Filipino-American heroes like Victoria Manalo Draves make Fil-Am kids believe that they can reach for higher goals, and stand out in America.”

Tolentino, who herself was an intern at West Bay when she was a high-school student in San Francisco, said she has the same objective for producing the film about Manalo Draves.

“I want (the film) to inspire the Filipino-American community, to show everyone that we are a part of America, just like anyone else. We are not secondary, we are equal. This film will show the spirit of our culture that is about overcoming all odds,” Tolentino said.