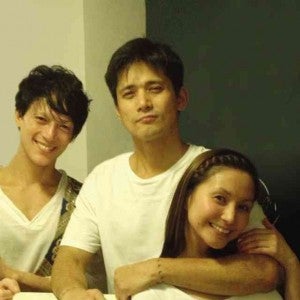 “HOWEVER, I make sure Mariel (Rodriguez, his wife, right) is around when I’m with BB,” Robin said. Photo from facebook

Action star Robin Padilla, who did not want to acknowledge his openly gay brother BB Gandanghari in the past, said he was ready to produce his gay-themed movie.

This, however, does not mean he would be a champion of gay rights.

The film would feature Gandanghari, Padilla and his daughter Kylie, the actor said.

“I will play a marine, who is a medal of valor recipient. BB will portray an MMA (mixed martial arts) fighter. He started training in aerial jujitsu recently. I’m so amazed by him—he hung some eight feet above the ground. That required discipline and the ability to conquer one’s fears.”

As to being an advocate for gay rights, Padilla said, “That’s BB’s role. I already have my hands full fighting for Muslim rights and the right to education of our youth.”

Padilla recalled an incident that led to his change of heart. “My son Ali was vacationing here when BB got sick. I tried to explain to Ali what his Tita BB was… When I was done, Ali replied, ‘It’s just respect, Pa.’ That hit me hard. I realized I was not giving BB the respect he deserved; that I was at fault. Everything changed after that.”

Since the incident, Padilla said his relationship with BB had improved tremendously. “However, I make sure Mariel (Rodriguez, his wife) is around when I’m with BB. Mariel creates balance. I sometimes feel ill-at-ease around BB, who has changed so much. He’s no longer the brother I knew. Mariel would sometimes remind me, ‘babae na ’yan.’”

Padilla shared with the Philippine Daily Inquirer the greatest lesson he learned from the experience. “What the Koran and the Bible predicted has already come true—our days here on earth are numbered. Let’s stop fighting and start treating each other with respect. Let’s forget about gender issues. Let’s just all be happy for each other.”

He appeared in three Kapamilya shows—“Guns and Roses,” “Kailangan Ko’y Ikaw” and “TodaMax”—after he signed up with the network two years ago.

“I will join the network with the best offer. I want substance. I want to work on projects that will make a difference. I’m not getting any younger,” said the 43-year-old actor. “I have nephews who are very capable of playing the part—Daniel, Ralph and RJ. My daughter Kylie, pa-cute din ’yon.”

Padilla added, “ABS-CBN treated me well, but I want to produce my own shows. I’m looking for a station willing to take me in not just as an artist, but also as a producer. I’ve been producing movies. I want to try TV this time. I want shows that are related to history.”

The actor said he left the sitcom “TodaMax,” which he started with comedian Vhong Navarro, because he wanted to focus on his movie commitments. “It’s hard to make people laugh. It’s more difficult than doing action movies.

I realized that I’m already too old to work long hours. I feel weak when I lack sleep. I spoke with Ma’am Cory (Vidanes, ABS-CBN channel head) about my problem and she understood.”

Padilla has produced two action movies—“10,000 Hours,” loosely based on the life of Sen. Panfilo Lacson and “Kuratong Baleleng,” about the notorious organized-crime syndicate.

Under Padilla’s endorsement contract with TNT, he would be a representative of the company in its partnership with the Yellow Boat of Hope Foundation (YBHF), a national movement that pools funds for the education of the youth in partner communities around the country.

The YBHF started by providing boats to transport kids in Zamboanga’s mangrove villages to their schools. It has since expanded by offering scholarships and supplies and conducting medical missions and livelihood programs in 13 communities nationwide.

“Sadly, this (should be) the responsibility of the government (but) I don’t think our officials are aware that these things are happening,” Padilla said.