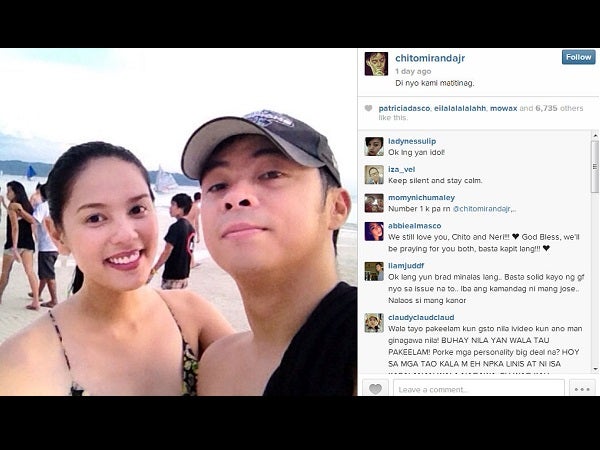 Beleaguered celebrity couple Chito Miranda and Neri Naig pose for a photograph on a beach in this screenshot of an Instagram post of the Parokya ni Edgar frontman.

The 7:17-minute video shows a naked couple who appear to be Miranda and his television actress sweetheart making love in various sexual positions. It made its unauthorized screen debut on YouTube, but was quickly taken down.

A cat-and-mouse game has since left YouTube pulsating as users sneak to post a copy of the sex tape that the popular video-sharing website would swiftly expunge.

Miranda, 37, took to Instagram Saturday to say sorry for a “leaked private video of me and my girlfriend” and later tweeted to explain that his computer hard disk drive and “several other stuff” were stolen.

Later that day, the singer-songwriter posted on Instagram a photo of him and 27-year-old Naig on a beach, bearing the caption “Di n’yo kami matitinag.”

INQUIRER.net reader Fulpol wonders: “What is the point of ‘video-ing’ your sex stunts with your lover? So you have performance parameters? Parang review ng basketball play. Hindi maganda ang performance kaya aayusin na ang performance next time. I don’t get it.”

Some fans came to their defense.

Al Christine  (@iamalchristine) tweets that Miranda “rocked with us through the years”, while Mike™ (@iamChanMichael) appeals to netizens not to “let one private video destroy Chito Miranda‘s legacy.”

“This should be a lesson for all of us, not an entertainment for perverts,” Mike™ adds.

“OhmyGee!” Meldelyn Deloso says, admitting she has admired Naig even during the reality search show Star Circle Quest on ABS-CBN television in 2004, where she made a 6th runner up finish.

Jesther Capil ‏(@jaaaaaamPONG) professes in a tweet hashtagged #respect his unwavering admiration for his idol. “I will always be a fan of Chito Miranda, no matter what.”

Harold Geronimo (‏@harold_geronimo) on Twitter opines: “That Chito Miranda-Neri Naig video scandal is another lesson for all couples to stop video recording their own private affairs.”

In 2009, the Internet sizzled after a sex video of celebrity cosmetic surgeon Hayden Kho with actresses Katrina Halili and Maricar Reyes made the rounds on the web after the surgeon’s computer files were stolen. Kho would later be stripped of his professional license and slapped with lawsuits for illegally taking videos of his hot trysts.

Some web citizens simply poke fun at the scandal.

“Only Neri touches my Birdie,” tweets Boy Banatero (‏@BoyBanatero) in what seems to be a funny allusion to Parokya ni Edgar’s 1999 hit single “Don’t Touch My Birdie.”

Joey Kyle ‏(@kyleeismyname) posts a made up message of Kho to Miranda: “Been there, done that bro.”

For YouTube user PinoyCommercials096, the sex video is simply too lurid to handle. “Oh my God I can’t be in here. Oh my God…!!!!!!”

But INQUIRER.net reader Jaeger Meister, like many netizens, is in dire straits. “Now, the million dollar question is: Where can I find this steamy video, huh?”