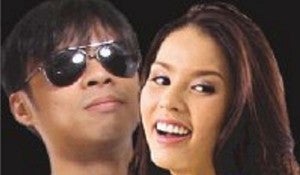 MANILA, Philippines—Rumors have been swirling on the Internet about an alleged steamy tryst between Parokya Ni Edgar lead-vocalist Chito Miranda and his actress girlfriend Neri Naig.

A video purportedly of Miranda and the 2004 Star Circle Quest 6th runner up shows them in their birthday suit and having sexual intercourse. It was uploaded on video-sharing site YouTube but was quickly taken down.

Screenshots were being reposted on social media.

“We are truly saddened by the fact that someone leaked the private video of me and my girlfriend, Neri Naig,” Miranda posted on Instagram.

“I am asking for forgiveness from our families for this unfortunate incident,” he said in a mixture of English and Filipino.

Later in his tweet, he said: “Our hard drive was stolen from our room in our house along with several other stuff…”

Miranda, however, did not confirm in his posts whether the couple in the sex video were really him and 27-year-old Naig.

The Parokya Ni Edgar frontman said he would not give interviews on the issue. With Allan Policarpio, Inquirer Entertainment

All 21 on board scramble to safety after Texas plane crash