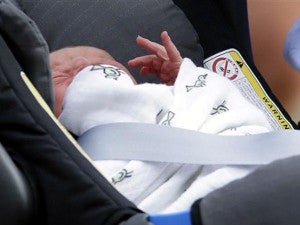 This is a Tuesday July 23, 2013 file photo Prince George of Cambridge lays in a car seat as his parents, Britain’s Prince William and Kate, Duchess of Cambridge leave St. Mary’s Hospital exclusive Lindo Wing, in London where the Duchess gave birth on Monday July 22. Be patient everyone: Your order will be processed, but like little Prince George, you will have to get in line. It took perhaps 45 seconds for the heir to the throne to be carried from St. Mary’s Hospital in his car seat to be settled in the black royal Land Rover last week. But it was long enough for the world’s photographers to capture his tiny hands emerging from a cotton swaddle printed with little birds. Distinctive little birds. AP

LONDON  — Prince William gave guests at a charity polo match an insight into his newfound paternal duties Saturday, saying his mind had been stuck in “baby mode” thanks to his feisty newborn son.

William was playing alongside his brother Harry at the Audi Polo Challenge in the English village of Ascot. The match came less than two weeks after he and his wife, Kate, had their first child, Prince George, and William told spectators it was “good to get out of the house” for the afternoon.

The 31-year-old royal managed to score the winning goal for his team and was later presented with a miniature polo stick for his baby boy. He jokingly asked if he’d be getting some nappies — the British term for diapers — instead, telling guests he had to “pick some up on my way home.”

Of his performance on the pitch, William said he was “in baby mode out there, thinking about nappies. I wasn’t really in the zone.” When quizzed about George, he said the little prince, who was born July 22, “likes to move around a lot. He wriggles a lot. He keeps on our toes.”

The polo outing was William’s first public appearance since the birth of his son captured the world’s attention. Kate and the baby were not in attendance.