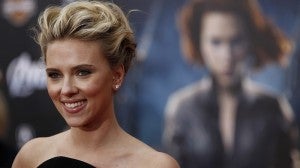 PARIS— Actress Scarlett Johansson is suing a French publishing house over a novel that uses her name and image and explores the challenges of being beautiful.

The JC Lattes publishing house said Friday that a lawsuit was filed last week about Gregoire Delacourt’s book “The First Thing We Look At.”

JC Lattes spokeswoman Emmanuelle Allibert says the publisher’s lawyers are preparing to respond to the court, which will then decide whether to take up the case.

Allibert says the book is entirely fiction and is about a character who looks just like Johansson, not Johansson herself. That character is enmeshed in a romance with another lookalike — one modeled after film star Ryan Gosling.

Johansson’s French lawyer Vincent Toledano said in a statement to The Associated Press that Johansson is protesting the use of her name and image for “mercantile” purposes, and accuses the book of invading her privacy.

“The freedom of speech she defends as an artist is not being challenged in the lawsuit. However the right of free speech has nothing to do with this purely mercantile conduct,” the lawyer said.

The publisher argues that the lawsuit “is contrary” to the idea of the book. The author “only says good things about” Johansson, Allibert said.

Delacourt has had bestsellers, though some critics have skewered “The First Thing We Look At.” Le Monde’s reviewer said that Delacourt, who works in advertising, “sells us his story like he would sell us shower gel: fake emotions, blurred eroticism, venal humor.” Magazine Les Inrocks called it “low-cost literature.”