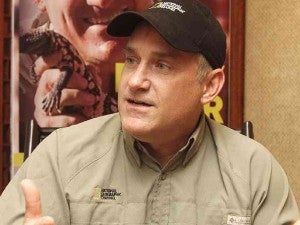 CROC HUNTER Brady Barr: Filipinos are extremely lucky to have a unique and diverse wildlife in their midst. JOAN BONDOC

He made history by being the first crocodile expert to have captured all 23 extant species of crocodilians in his career, but Brady Barr particularly remembers his encounter with the Philippine freshwater croc in a remote village in Isabela province and considers it as a “very special, very emotional moment.”

That freshwater croc was the last of the 23 crocodilians he had set out to capture and study.

“Even today when I think about it, it gets me all choked up. This place is very special to me in many ways,” said the host of “Dangerous Encounters” on Nat Geo Wild, who was in town recently for the Philippine leg of his Asian tour as National Geographic Channel Asia’s brand ambassador.

Barr said his 2006 encounter with the critically endangered Philippine crocodile, a species rarely seen in the wild, seemed to have come by providence.

“My wife was pregnant with our first child and we had just decided that we were going to name her ‘Isabella.’ [At that time], I didn’t know where we were going. We pulled into this village and it said ‘Isabela,’ and I knew it was meant to be,” he recounted.

“It was like the crocodile gods smiled and you know it was going to happen,” he added.

It was a stormy night “of lightning and thunder,” Barr said, so he asked his TV crew to go somewhere so as not to scare the animal away.

“So I’m all by myself, and a big storm was coming in. It was kind of uneventful,” he recalled. “I looked down and there it was. And I grabbed it.”

Barr, who has been to over 70 countries, has captured 23 crocodilian species, including crocodiles, alligators and caymans, in a feat that scientists say is unlikely to be repeated.

“I never dreamed as a kid that I’d do something that has never been done before, and to do it in such a beautiful place,” he said.

The freshwater croc that Barr encountered is endemic to the Philippines and is one of only two crocodilian species found in the country.  The other is the Indo-Pacific crocodile, or Crocodylus porosus, that is also found in tropical areas in the Asia-Pacific region.

The Philippine croc, whose males average three to four meters in length, is relatively small compared to its Indo-Pacific cousin.

“Lolong,” the world’s largest crocodile that was captured in the Agusan Marsh and which died of pneumonia and cardiac arrest in February, was an Indo-Pacific crocodile.

Barr said he was saddened by news of Lolong’s fate.

“Truly, giant crocodiles are very, very special,” he said. “They’re very few and far between. There are fewer of them on the planet every single day for a number of reasons: habitat loss, illegal fishing activities … We kill them out of fear and ignorance,” he added.

But Barr said blaming Lolong’s conditions in captivity as the possible cause of death would be hasty.

Asked what Filipinos might have done wrong with Lolong that the Australians were doing right with Cassius, to whom the title “world’s biggest captive croc” has reverted upon Lolong’s demise, Barr said, “Maybe nothing.”

“It’s really hard to say, particularly when you catch an animal (that’s) coming from the wild. That’s a really stressful event for an animal, especially for an old animal like that. That animal was may be 60, 70, maybe 80 years old,” he said.

Barr added that it was also possible that Lolong had a pre-existing condition before his capture that no one knew about.

“Crocodiles are big predators. We as humans sometimes have a hard time living among big predators. They get into trouble and are deemed a nuisance,” he said.

With a problem crocodile like Lolong, which was blamed for the death of a young girl and the disappearance of a fisherman before his capture, “you don’t have a lot of options,” Barr said.

He said only two options were available: Kill the problem croc or raise it in captivity.

“In a few instances, you can capture and relocate them but most of the time they come back to their place of capture. They can travel very long distances, and we scientists aren’t really sure how they do it,” the herpetologist said.

A happy counterpoint to Lolong’s sad story was Barr’s visit to Palawan province on Wednesday, where he got to meet Surigao, a giant saltwater crocodile that has been under the care of the Palawan Wildlife Rescue and Conservation Center for more than two decades.

Barr said Filipinos were extremely lucky to have a unique and diverse wildlife in their midst.

“You need to take care of it. You need to try to live more responsibly within the environment, whether it’s diving in the reef, looking for a crocodile or fishing in the sea. This is a fantastic place, and I think many of you take it for granted,” he said.

Barr went on to enumerate some of the animal species found in the country, among them “the Philippine crocodile, even the world’s largest fish, the whale shark. I’ve never even seen a whale shark. You’ve got [one of the smallest primates], the tarsier. You’ve got an endemic species of pangolin…”

Compared to where he was born (Fort Worth, Texas), and where he lives now in the United States (Maryland), the Philippines is a “paradise,” he said.

“You guys live in a spectacular place. I mean I’m envious. It’s a paradise here. In terms of your marine ecosystems, your tropical rainforests, all the flora and fauna here, it’s special. You should see where I grew up, you should see where I live now in the States, it’s nothing like this. It’s a special place, and you should be very proud of it,” he said.

“I’m definitely gonna come back because I’m interested in the things I want to see, and places I want to go to here in the Philippines,” Barr said.