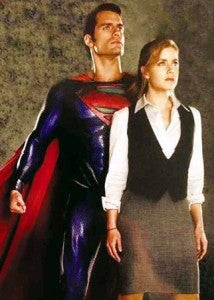 CAVILL AND ADAMS. Portray Superman and Lois Lane in latest reboot of the “Superman” franchise.

Does Henry Cavill have what it takes to wear Superman’s tights and cape? In Zack Snyder’s “Man of Steel,” the 30-year-old British actor doesn’t just sizzle in the iconic costume, he also lends gravitas to the mightiest superhero of them all, making Clark Kent relevant in an era far removed from his “humble” 1938 beginnings. Yes, the latest installment of the Superman franchise won’t blow you away, but to say that it’s unsatisfying would be a mistake.

Let’s put things in perspective: You can’t put Superman back into flight without major hurdles. After all, how do you retell the tale of the Kryptonian immigrant without drawing unfair but unavoidable comparisons to Christopher Reeve’s definitive portrayal in Richard Donner’s 1978 blockbuster?

Russell Crowe and Kevin Costner are movie icons in their own right—but, in the eyes of those who’ve seen Marlon Brando and Gene Hackman effortlessly chew up the scenery in those early “Superman” flicks, it would be difficult to measure up to expectations built around those celebrated actors!

For young moviegoers, the template of the superhero movie has been set up by Marvel’s inventive movie-making machinery: By casting fine actors like Robert Downey Jr., Chris Evans and Mark Ruffalo in cleverly concocted “origins” stories, Marvel has turned erstwhile second-tier characters like Iron Man and Captain America into formidable box-office sensations. Their unique combination of winking camp and substance are a perfect antidote for the doom and gloom of the current world order.

At the opposite end of the spectrum is Christopher Nolan, who ingeniously turned Batman’s tale into a “relatable” Shakespearean saga. But, the success of The Dark Knight franchise is harder to duplicate—especially because it isn’t in Clark Kent’s nature to constantly brood about the woes of the world. He usually irons out psychic kinks with a smile—the way Christopher Reeve waved and smiled after saving a helpless kitten on a tree.

Following the implosion of Krypton, “Man of Steel” hews close to the story of Kal-El aka Clark Kent after his parents, Jor-El (Crowe) and Lara (Ayelet Zurer), send him to earth—where he’s raised by Jonathan and Martha Kent, portrayed by Kevin Costner and Diane Lane, who are both outstanding in their roles.

To keep their only son safe from intrusive and probing humans, Jonathan compels Clark to keep his real identity—and emerging powers—secret, even if it means getting bullied by his peers.

After Clark saves a busload of drowning schoolmates, Jonathan reprimands his son for “exposing” himself to scrutiny. He reasons, “People are afraid of what they don’t understand.” But, even as a child, Clark knows what’s right and wrong: “So, do I just let them die?”

Meanwhile, General Zod (Michael Shannon) and his genetically conditioned soldiers escape Krypton’s Phantom Zone and go after Jor-El’s son, who holds the blueprint for the new world they intend to build on the blue planet, at the expense of its powerless inhabitants!

With bullies and intergalactic warriors hot on his tail, it’s no wonder why there’s little for Clark to smile about. This is also what drives the “serious” tone of the movie—an existentialist ploy that later explains why Superman is instantly drawn to Lois Lane (Amy Adams) and her line of work.

The stubborn reporter from The Daily Planet inspires Clark to lighten up and smile, especially after his mano-a-mano with Zod reduces a good portion of Smallville and Metropolis to rubble. Much of “Man of Steel’s” humor is dished out only after Superman finally comes to grips with his reason for being.

If you crave for the easy chuckles and cheeky asides that pepper “Iron Man” and “The Avengers,” you won’t find them in “Man of Steel.” —But, if you want a film that takes its protagonist’s woes seriously without ramming them down viewers’ throats (as the underrated “Superman Returns” did), this is the movie to see!