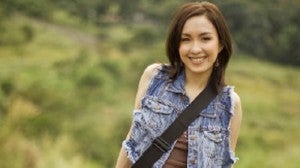 Rachelle Ann Go’s debut in musical theater as Ariel in Atlantis Productions’ staging of “The Little Mermaid” in 2011 was met with generally positive reviews. That, she said, made her realize she could be so much more in the industry than just a recording artist doing occasional acting projects on TV.

The 26-year-old Kapuso artist, who made it to the shortlist of last year’s Manila auditions for the planned restaging of “Miss Saigon” in 2014, said she would love to be in at least one musical every year.

“I fell in love with theater, the whole experience,” Rachelle Ann told Inquirer in a recent interview. “It can be exhausting, but the satisfaction is unexplainable. Seeing the audience react as I perform gives me joy.”

For her second theater outing, the singer-actress will play Jane Porter in the local staging of “Tarzan,” also by Atlantis Productions. Based on the Disney animated movie and the novel by Edgar Rice Burroughs, “Tarzan” was adapted for the stage with a book by David Henry Hwang and music by Phil Collins.

The title role will be portrayed by US-based Puerto Rican actor Dan Domenech, who made his Broadway debut as Drew in “Rock of Ages” in 2011.

“This one’s definitely more mature than ‘The Little Mermaid,’ but I can say that it’s just as fun and exciting. The music, costumes and set designs are fantastic,” Rachelle Ann enthused. “The story seemed light at first. But I later found that the story was quite intense—about love, family, relationships.”

Rachelle Ann, who had been rehearsing almost daily, from 11 a.m. to 5 p.m., for the past two weeks, said she felt a connection with her character. “Jane and I are both nerds and quite talkative!” she said. “We are fearless; we love to explore.”

Admittedly, Rachelle Ann was hesitant to accept the project when it was offered to her by director Chari Arespacochaga, because the role requires her to speak with a British accent. “I was like, ‘Kaya ko kaya ito?’ Nosebleed!” the singer said, laughing. “I watched a lot of British films to get an idea.” But the real challenge, Rachelle Ann pointed out, was drawing the right emotions for her scenes with Tarzan, who has almost no speaking lines. “It’s hard; I utter a kilometric line and he doesn’t reply. At times I feel like I’m talking to myself,” she said. “Since Tarzan’s character isn’t really realistic, I have to make myself believe that I’m talking to a wild man raised by apes.”

How does she find her leading man, Dan? “He’s professional and fun to be with,” she said.

On top of the long rehearsal hours, Rachelle Ann juggles TV commitments in GMA 7—where she’ll be part of the coming weekend variety show, “Sunday All-Stars”—and other singing engagements. That’s why she has been taking extra care of her voice. “I don’t eat sweets and make sure I get enough sleep. My schedule is quite heavy right now, but all it takes is discipline…and lots of vitamins!” she said.

As a musician, Barbie Almalbis admits she has blind spots that at times prevent her from accurately assessing her work. That’s why she feels “blessed” that her husband, Martin Honasan, is an artist as well—a painter—whom she trusts to tell her which aspects of her singing, guitar-playing or songwriting need improvement.

“My husband helps me grow,” Barbie told the Inquirer in a recent interview. “In turn, when he’s almost done with a painting, he asks what I think of it.”

Barbie and Martin have just finished a collaborative work for an art compilation book being done by Kimberly Rocha of Yellow Door Gallery.

“Martin did the painting and I wrote a song based on it,” said Barbie.

Looking every bit the young lass who sang the theme song of the late 1990s youth-oriented drama series “Tabing Ilog,” Barbie, it’s quite hard to believe, already has two kids—Stina, 6, and Liam, 3.

For Barbie, life was a lot more spontaneous when she was single. Now, she says, she has to plan all her gigs with her kids in mind.

“I wake up early and sleep late. I always try to make my gigs as early as possible so I can have time for my kids. It’s a challenge that I haven’t really hurdled yet,” she said.

The rocker chick spends quality time with her children by…how else? Jamming with them!

Barbie, who has been writing songs since age 14, feels she has enough material for a followup to her 2011 album, “Goodbye My Shadow” (12 Stone Records).

Barbie and fellow 12 Stone Records artists Kitchie Nadal, Rocksteddy, Save Me Hollywood, Absolute Play and Ruth Legaspi are currently on a music tour that runs till October in various Megaworld Lifestyle Malls. The tour kicks off with shows at the Venice Piazza in McKinley Hill today, Sunday.