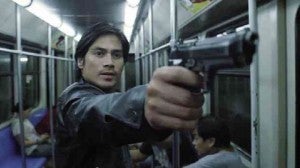 PIOLO Pascual aims at the “core” of his assassin character. Photo from ORANGEMAGAZINETV.COM

There is a third Filipino film that will premiere in Cannes next month.

Apart from Lav Diaz’s “Norte, Hangganan ng Kasaysayan” and Adolfo Alix Jr.’s “Death March” in the Un Certain Regard section, Erik Matti’s “On the Job” was selected to be part of the Directors’ Fortnight, “a noncompetitive, independently programmed section that is held parallel” to the main competition of Cannes.

Matti considered the film a “maindie,” a marriage of mainstream and independent filmmaking styles. The film is coproduced by Matti’s Reality Entertainment and Star Cinema, the film arm of ABS-CBN.

“On the Job” was inspired by a real-life corruption case that involved prisoners being released for a day to work as assassins for politicians. 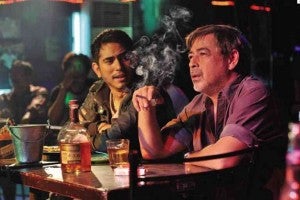 GERALD Anderson (left), who portrays a hired killer, in a scene with Joel Torre. Photo from TWITCHFILM.COM

Matti recounted: “My cowriter Michiko Yamamoto and I did research for two years. We interviewed prison wardens, prisoners, policemen.”

Martinez, who plays a crooked general in the film, recalled:  “As early as the story conference, we already felt that this film would go places. Matti was very meticulous on the set.”

That mainstream actors like Pascual and Anderson got to tackle out-of-the-box roles was a positive development, Martinez pointed out.

The ABS-CBN heartthrobs are cast as hired killers in “On the Job.”

“We had a series of major character discussions with Piolo and Gerald,” Matti recalled. “I had to make them forget how different they were from their characters and get to the very core of the people they were portraying.”

According to its website, the goal of the Directors’ Fortnight is “to help filmmakers get discovered by critics and audiences alike.” 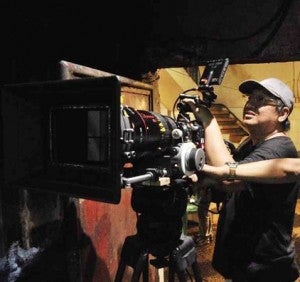 DIRECTOR Erik Matti is very meticulous on the set. Photo from TWITCHFILM.COM

“I admit I knew very little about Cannes before. So when we got in, I looked up the Directors’ Fortnight and realized that I was in the company of big names in Philippine cinema,” Matti said.

Matti hopes to attend the festival with some of his actors, led by Torre, Pascual and Anderson.

He said: “It’s exciting. Filipino filmmakers are doing a good job. The world will see the variety of Filipino films now: From the abstract to the poignant, from the humorous to the serious.”

Martinez is likewise glad that there are three Filipino films in Cannes this year. “There is still hope for Philippine cinema.”

“Thousands of films applied. It’s difficult to get in Cannes. Having three entries is a big deal for Filipino cinema,” Matti agreed.

Matti was one of the honorees in the first Inquirer Indie Bravo! Tribute three years ago.

The Directors’ Fortnight will be held from May 16 to 26.

Singaporean Anthony Chen’s debut film “Iloilo” will also have its world premiere at the Directors’ Fortnight section of Cannes. “Iloilo,” which tells the story of a Filipino nanny, top-bills local actress Angeli Bayani, who’s also in the cast of Diaz’s “Norte.”