Blind auditions of ‘The Voice PH’ over 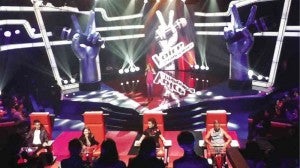 JUDGES turn their backs, but lend keen ears, to “The Voice” hopefuls. Photo from twothreefourfive66.tumblr.com

“The Voice of the Philippines” blind auditions are over! And oh, what a mammoth task that turned out to be. I did not anticipate the difficulty all four of us coaches—apl.de.ap, Bamboo, Sarah Geronimo and I—would face in the four days of screening singers with our backs turned.

Before continuing, allow me to give you a crash course on this early stage of the newest singing competition to hit Philippine television.

The blind auditions are exactly that: Blind. None of the four coaches are able to see or interview the contestants before they perform. If anything, it’s an incredible equalizer. None of us know the background stories of any of the contestants, whether they are professional singers, kariton pushers, food vendors, students, parents, widowed, orphaned, rich or poor. All we have to rely on, truly, is that singer’s voice.

First, the studio audience sits in complete silence. The four of us sit at our red chairs with our backs turned to the stage, at times quietly, at other times in animated conversation. I then hear musical director Bond Samson’s metronome click, making me wonder what kind of song we’re about to hear. Will it be an up-tempo number? Are we going to hear a ballad? Samba? Jazz? R&B? OPM? I keep my eye on the floor director sitting a few feet away. He waves his hand, which signals the band to start playing. I then start to focus, letting the intro to the song pass, as I await the voice to start singing.

It can take anything from a few seconds to the duration of an entire song before a chair turns. If more than one of us think the performer is exceptional, then two, three or even four chairs will swivel, and we are then able to feast our eyes on the performer on stage. Sometimes the voice and the visual are a complete match; sometimes what we see is a complete contradiction to what we just heard.

If only one chair turns, then the singer is automatically added to that coach’s team. However, if more than one chair turn, the coaches have to sell themselves in order to court that singer. At the end, that singer has to then decide on which team he or she will be on, and it’s always such a thrilling moment. I’ve my pulse racing while waiting … my heart then finally explodes when I’m actually selected. Whew, what a rush it always is!

However, the four days of auditions weren’t always just about business. We all had a truly great time. From the four coaches to our team of writers, the band, technical staff, stage management, director Johnny Manahan, and the studio audience (which changes every single day) everybody had a lot of fun. We shared a lot of laughter in the studio, and I think that would be evident once the show starts airing in mid-June.

A few days prior to the taping, the entire team was called into the ABS-CBN studios for a dry run of the show’s flow, just to give us a taste of exactly what we would be in for. First, we were briefed by Philibert Braat, Talpa’s representative in Asia (Talpa is the franchise owner of “The Voice”). He showed us a coaching video that gave us a glimpse of how the blind auditions go, and what was expected of us.

Later that evening, a few “contestants” were lined up with minus ones in hand to simulate the auditions. We, four, sat in our chairs, comfortably dressed. When each of the singers was finished, all of us gave our comments, after which the team of writers—each coach had one assigned to him or her, with one head writer, Garlic Garcia, overseeing everything—would approach the chairs and tell us where we went wrong. Anything from “try to explain the more technical terms in a language everyone can understand,” to “don’t put your head down, the camera can’t catch your facial expressions.”

We also gave our chairs a spin to check the speed at which they pivot, as well as how it felt when they stopped. However, Apl’s special video monitor wasn’t yet installed (Apl has nystagmus, an eye condition characterized by involuntary eye movements resulting in his being severely nearsighted; he’s actually legally blind). The monitor was there for the taping though, and I think it made him happy, especially when a very pretty singer happened to be on stage. Ha!

What struck me over the four days was the lack of “bitchiness” that we could see in other singing competitions, and we believe that was due to the kindness of the contestants themselves who sang before us. Each one, without exception, was a kind human being who, beyond being polite, was genuinely happy for the opportunity. I had expected a few head-to-heads, but nothing of the sort happened.

As for the coaches, we all get along really well with one another, and I think it’ll be obvious on TV. My chair is between Apl’s and Sarah’s, which makes my job fun. In Apl, I feel like I gained a very makulit younger brother who, on the last taping day, gave me last song syndrome with a spoof version of Rihanna’s “Diamonds” that he’d sing over and over. In Sarah, I found a sweet young thing that was fun to tease from time to time. However, she’s got some insightful comments for the contestants, and is very selective with the vocal quality she likes. As for Bamboo, ever cool, calm and collected, he can be very emotional when a very special singer performs before us.

We listened to 121 singers over four days. All genres of music. All body types. Men and women, straight and gay, young and old alike. Four days filled with laughter and lightness, and incredible life stories, but more than anything else, it was all about heavy-hitting talent. It truly was all about “The Voice.”

TAGS: “The Voice of the Philippines”, show