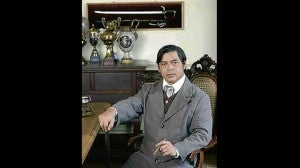 In the last two years, Joel Torre has appeared in at least four international productions—making him one of the busiest local thespians in the global arena.

Apart from American John Sayles’ “Amigo,” which he also coproduced, Torre is in French Dominique Farrugia’s “Le Marquis” and British Terrence Daw’s “Surviving Evil.” He also played a small but pivotal part in Michael Gleissner’s “Deep Gold,” produced by Big Foot, the Hollywood entertainment company that set up a studio and film school in Cebu.

Torre recalls that he was awed by the Big Foot facilities in Cebu. “They have high-tech editing suites and a huge soundstage. It’s like working abroad.” Big Foot plans to release “Deep Gold” in 2D and 3D digital cinemas on August 31. “It’ll be my first 3D movie,” says the screen veteran who made his debut in Peque Gallaga’s “Oro, Plata, Mata” in 1982.

The film can be best appreciated in 3D theaters, Torre explains, because it “showcases the country’s diverse marine life in several underwater scenes.”

Torre went scuba-diving for his role as an adventurer. “I’ve been diving for fun since 1987,” he says. “I dove 30 feet in my scenes that were shot off Cebu.”

Other key underwater scenes in “Deep Gold,” which top-bills Vietnamese supermodel Bebe Pham and AXN host Jaymee Ong, were filmed in the waters off Palawan. “We’ve only scratched the surface in terms of developing the tourism potential of our seas,” Torre notes. “With this film, the world will see how beautiful the Philippines is.”

On the set, he relates, Gleissner was like a kid in a candy store. “He just enjoyed himself and we all had fun.”

It was a very valuable lesson for Torre as an actor. He clarifies, “Working in international productions, I tend to put too much pressure on myself, wanting to prove myself. But I’ve realized that I should take it easy. By being relaxed, one can achieve acting that’s effortless and natural.”

That was precisely what film reviewers praised in his work in “Amigo,” for which he was nominated best actor by the local critics’ group at this year’s Urian. “I’m elated by the good reviews,” Torre admits.

Another goose-bump moment, Torre recalls, was when “Amigo” premiered at the San Sebastian Film Festival in Spain last year. “We went down a grand, winding staircase and were met by a clapping, cheering audience at the foot of the stairs.”

Torre will fly to the United States on August 19 for “Amigo” runs in New York, Seattle, San Francisco, Los Angeles and Honolulu.

He says he was “discovered” by the British team of “Surviving Evil” through one of his TV soap operas. “That’s why I take my work in soaps seriously. Who knows who’s watching?” (He is currently cast in ABS-CBN’s “100 Days to Heaven.”)

In terms of talent, Filipino actors and film technicians can stand alongside the world’s best, says Torre. He just wishes that the organized, 12-hour shooting days in foreign productions will be applied locally. “I know it’s a matter of economics, but my dream is that, before I retire, local actors would be enjoying more systematic working conditions here—not only for health reasons, but for creative reasons as well.”

Hidilyn Diaz cheers Nesthy Petecio on: ‘Go for gold, you can do it’