Photo-finish twist for ‘Princess and I’ 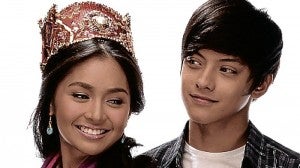 Fans of “Princess and I” made sure they were all present and accounted for when the popular and long-running teleserye had its concluding telecast two weeks ago.

We, too, make it a point to catch the drama series’ eventful conclusion, which finally settled the big, all-important question of who among Kathryn Bernardo’s three ardent swains would claim her heart of hearts.

At first, it looked like the royal Prince Jao would be “it.” After all, his all-powerful mother, played by Gretchen Barretto, had the king in thrall, and the country needed the wedding for peace to reign once more over its troubled land.

Ah, but even Gretchen failed to take into account the fact that Bernardo’s “love team” with Daniel Padilla is being given the big, build-up treatment, to delight the fave tandem’s many teen and tween fans.

Thus, in deference to them, the final telecast was given a photo-finish twist: It was Jao who put a stop to the wedding rites, making his mother really furious! In fact, she was so outraged that she ended up shooting her own son!

Of course, that cleared the way for Daniel and Kathryn to end up in each other’s arms—everybody happy!

As for the self-sacrificing Jao, he also benefited from the final plot twist, because it made him exit the TV series smelling like roses—a veritable martyr on the altar of true love, tra-la!

On point of thespic achievement, however, the show’s climactic telecast was an underachiever, because the show’s leads came up with ardent, urgent but generally predictable performances.

Even Kathryn, who was shown standing up to the “ferocious” Gretchen, was only predictably insistent as she laid down her conditions for agreeing to be wed to Jao.

For her part, Gretchen was gorgeous but strangely stolid, even after her character shot her own son. If this is “underacting,” we don’t like it one bit! It’s taken months and months for the series’ principal characters to build and peak, so we expected their concluding and conclusive moments to be deeply memorable, rather than their coming off as just sort of “stunned.”

What about Daniel Padilla? As the young male comer of the season, he banks heavily on his cute looks and signature mop of hair, as well as his being the “nicer” version of his uncle Robin Padilla’s decades-long “bad boy” screen persona. It’s served Daniel pretty well thus far, a “kilig factor” that has gained many fans for him.

But, we wonder how long the borrowed image can productively work for him, before it runs out of its “sort of edgy” appeal. If his first movie with Kathryn turns out to be a big hit, he can ride that new tsunami wave of public approval and vindication for some more months.

But, if for some unexpected reason it doesn’t do as well as expected, Daniel will have to think up other ways to keep his droves of fans delighted—and hot and bothered.

TAGS: Princess and I, Teleserye, Television