Message to Blake: Come back soon 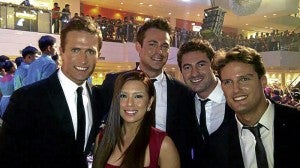 BRITISH band Blake with Nikki Gil before the Glorietta show

Most assuredly, more than just a few female hearts fluttered at the arrival of the British classical vocal quartet in Manila (on Nov. 30). I’ve heard of them from their past trips to the country for performances, but unfortunately, until just days ago, I hadn’t gotten the chance to get to watch them. But lo and behold, I get to perform with them now.

Fortunately though, the Ayala Malls organized a series of concerts called “Kindred Voices” with Blake touring the various Ayala shopping centers in Cebu, Taguig, Makati (for two nights at the risen-like-the-phoenix Glorietta 2), Alabang, and Quezon City. Nikki Gil and I would be splitting singing duties, and our group would be rounded off by the Consortium of Voices under the direction of The Madrigals’ Mark Anthony Carpio) and the ABS-CBN Philharmonic Orchestra (under the baton of Gerard Salonga).

Our rehearsals were at the ABS-CBN facilities in Quezon City, in one of their larger studios. After exchanging initial introductions and pleasantries, it was time to get to work. Nikki and I, in order to save time, sang all of our stuff together, including all solos and group numbers (a few of the orchestrations were actually mine, so she recorded the sessions for clean copies for her study). I’ll admit, it was certainly an expeditious way to get things done, as we didn’t have the luxury of time to rehearse things individually. And truth be told, we got everything done earlier than expected. I love it when rehearsals go better than planned. 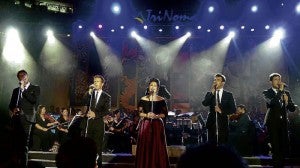 The full orchestra participated only in the Metro Manila performances (there was a different choir and only a few local orchestra members plus the APH’s concertmaster Ralph Taylan present in Cebu). Nikki handled Cebu, Market Market and one Glorietta show; I took the other Glorietta performance, plus Alabang Town Center (ATC), and TriNoma.

It is certainly a most unexpected thing to find a full 40-piece orchestra, plus six rhythm section players in the middle of a mall. But this Christmas season, it happened, and quite beautifully.

There is an inherent challenge however in singing in a busy shopping center full of people rushing to prepare for the holiday season.

First of all, let’s address the acoustics.

A shopping mall isn’t exactly built for concert performances. The sound bounces off the hard wall and floors, plus the sound level of the video arcades and the holiday hubbub add to the challenge, and no matter how great the sound system is, that’s something to rise above.

Glorietta 2, since it’s newly built with great dressing rooms beneath the stage, didn’t pose too much trouble, and our sound check went off quite uneventfully. The concert performance went like a dream.

However, I had a feeling we’d have a different set of challenges for ATC and TriNoma. I had performed in ATC, and the one thing that helped me through it was a set of inner ear monitors, so while in Glorietta I asked one of our production people Janice Dee to tell our sound people to prepare five of them (one for myself and one for each member of Blake), in case we ran into problems. And, as anticipated, we did.

ATC’s activity center is at the middle of a very busy mall, and the Christmas season makes it even busier. There is TimeZone at the top floor, whose literal bells and whistles can be heard throughout the mall, as well as a carousel and other games on the ground floor.

We did our sound check with all of it going on, figuring out the best sound levels for vocal microphones, the orchestra and certain individual components, and the balance of all these elements coming out through our monitors on stage and the monitors in our ears. We’d have trouble with feedback (the really annoying high-pitched whistle that happens when you point a mic at a speaker), and with levels (“Can we have more drums in the monitor”… “I can’t hear the bass drum” … “Could I have the other vocals in my mix, too, please”).

It took some doing, but we found the balance and had a really fabulous show.

At TriNoma, the challenge was its irregular shape and immense size. The sound board hadn’t changed its settings, but our sound engineer Rards Corpus was able to keep things under control.

The one thing all the malls have in common is that the activity seemed to quiet down once the shows started. Even TimeZone seemed to lower the volume, and the carousels stopped turning. It was such a lovely series, and I’m actually very sad that it all ended. I sure hope for another opportunity to perform with Blake in the future, as well as with the APO. I’m biased perhaps; my brother and sister-in-law are part of it.

To Ollie, Humphrey, Jules and Stephen, thank you for spreading your brand of Christmas cheer with us. Do come back; your friends and fans miss you already.

By the way, thank you to Jaime Zobel de Ayala for watching the Glorietta show with your family, and for such a lovely meal following the performance (yes, I’ve dropped the “Don” that usually precedes his name, as he has expressed discomfort at being addressed as such… he’s also a gin-and-tonic man, which endears him to me, as I’m a sucker for the same).

Read Next
No bad blood between Ai Ai and Bossing
EDITORS' PICK
Leveling up your ‘lutong bahay’ with the kitchen companion you never knew you needed
SM prepares for ‘safe malling’
Notice of 2020 regular meeting of stockholders June 18, 2020
LIST: What to expect in areas under GCQ, MGCQ
Drilon wants repeal of penal provisions in proposed Bayanihan extension law
DOTr bares 2 phases of public transport revival in GCQ areas
MOST READ
LIST: What to expect in areas under GCQ, MGCQ
Hong Kong loses US ‘special status’ — what next?
Duterte approves Metro Manila’s shift to GCQ starting June 1
Bocaue Mayor Joni Villanueva passes away, Sen. Villanueva confirms
Don't miss out on the latest news and information.