Filipino’s victory in France a tie with Russian actress 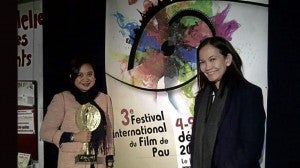 Domingo attended the festival with producer Joji Alonso, who announced the victory on Facebook. Pau is near Lourdes.

The trophy was created by sculptor Chahab (according to the fest’s site). She tied with Russian actress Vera Strokova, star of the film “Chapiteau-Show.”

According to an online report, the Pau fest’s goal is to “introduce politically engaged films” to the French audience.

She was one of the honorees in the Indie Bravo: 3rd Inquirer Indie Tribute held Monday night at the paper’s Makati office.

Upon her arrival, Domingo went straight to the doctor for a checkup.

In an earlier interview, Domingo said that competing in festivals abroad “is a great opportunity to [showcase] our country. It inspires and reinvigorates me and strengthens my sense of Pinoy pride.”

As an actress, Domingo values “freedom and acting in films that I feel passionate about.”

Chris Martinez, “Septic Tank” scriptwriter, told the Inquirer on Sunday: “This award proves that she is really one of the greatest actresses of this generation. It is a fitting reward for her dedication to her craft. She gives her all in everything that she does.”

Martinez considers Domingo’s international triumph “good news that’s worth celebrating,” in light of the series of tragedies that recently pummeled the nation.