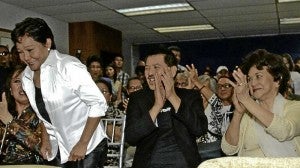 HONOR FOR AUNOR As the Superstar stands to receive her Indie Bravo! trophy, fellow honorees Brillante Mendoza and Fides Cuyugan-Asensio, and everyone in the hall cheer her on. JIM GUIAO PUNZALAN

The event salutes filmmakers  who have received awards for their works in festivals here and abroad.

Dubbed “Indie Bravo!” for this third edition, the program was held, as usual, at the Inquirer office in Makati City. It was a “box-office hit,” observed perennial guest Briccio Santos, chairman of the Film Development Council of the Philippines.

For most of the honorees, it was a little more personal—a rare and happy reunion party.

Aunor was surprised to see Garcia, who directed her in the 1978 movie “Atsay.”

She said she had initially felt “nervous” at the sight of old colleagues. “When I meet artists I admire,” she said in Filipino, “I always get tongue-tied.”

Garcia and Aunor are nominated for best actor and actress honors at the Asia Pacific Film Festival, ongoing in Macau and culminating on Dec. 15.

The “Superstar” said she wanted to stay, watch the entire program and chat with friends.

There was enough time to discuss a possible movie together with fellow honorees Jaclyn Jose, Cherry Pie Picache and Gina Pareño, but Aunor had to rush to the TV5 telethon for Typhoon “Pablo” survivors that night.

“It’s great to see old friends in an intimate setting,” said Jose, who was “happy that Ate Guy is back.” “Guy” is Aunor’s nickname. The two worked together in the 1995 movie, “The Flor Contemplacion Story.”

Monday’s event also reunited Aunor with Fides Cuyugan-Asensio, a special honoree, who was a judge on the TV talent show “Tawag ng Tanghalan,” where the singer-actress was discovered in 1967.

Asensio recalled: “Nora, who was 11 at the time, was my single choice as champion.”

Because she had come from the opera world, Asensio admitted that she “felt like an oddball [at the indie tribute]. But I found the film folks’ warmth and the camaraderie in the room so welcoming and inspiring. How I wish indie films  happened earlier in my life.”

Asensio got to catch up with yet another honoree, Shamaine Centera-Buencamino, her costar in “Niño”—and also with the film’s director Loy Arcenas, who was cited last year.

This year Asensio and Vincent Sandoval, star and director of  “Aparisyon,” were similarly honored.

Sandoval, who is based in the United States, asked his producer Darlene Catly Malimas to receive his trophy and Guyito (the Inquirer mascot) stuffed toy. “This means a lot to Vincent,” Malimas said.

Pareño said she felt like a fish thrown back to the sea at the Inquirer party because, “I miss hanging out with indie filmmakers.”

“This is a great reunion and celebration,” said Alix, who met up with three stars he had previously worked with—Picache (“Isda”), Jose (“Donsol”) and Garcia (“Ride to Love”).

Cannes-winning filmmaker Mendoza, cited for “Thy Womb,” also caught up with lead stars from three of his movies: Pareño and Jose (“Serbis”), Picache (“Foster Child”) and Rustica Carpio (“Lola”).

Carpio was happy to get a hug from Aunor, who was her daughter in the 1980 Lino Brocka film “Bona.”

Mendoza said his favorite moment during the tribute was honoring Garcia, Carpio, Asensio and Anita Linda. “They truly deserved that,” he said, “because these artists have transcended their age.”

Linda, who was in the United States to visit a son, had asked Alix to receive her award, with a specific instruction: “Don’t forget my Guyito.”

Like many of the acting honorees, Carpio had sneaked out of a taping to go to the party. Carpio, who wore an elegant black outfit, jested: “From here, I’m going back to the set, and back into a duster.”

Filmmaker Benito Bautista, honored for two films—“Harana” and “Boundary”—said he was elated “to be in the same room as cinema luminaries.”

For Auraeus Solito, honored for the film “Busong,” the two highlights of the evening were seeing his mom proud of him, and talking to screen legend Garcia. “Eddie told me that ‘busong’ (native Palawan for  ‘fate’) meant the same thing in Bicolano,” said Solito.

Apart from his mom Leonarda, Solito thanked pioneering indie filmmaker Kidlat Tahimik, who, he said, “served as a bridge” for indigenous cinema. Or, as Tahimik said in his speech: “Indie-genius.”

Actually, Tahimik was honored last year, but was unable to attend the ceremony. He requested that his trophy be given to him this year. “I wanted to meet and talk with young indie filmmakers, too,” said Tahimik, who had traveled from Baguio, where he is based.

Tahimik presented his own award, a bamboo camera trophy, to the late Inquirer publisher Isagani Yambot, a staunch supporter of local indies, who died earlier this year.

Also lauded at the event were four industry stalwarts who had passed on in the second half of 2012: filmmakers Mario O’Hara, Marilou Diaz-Abaya and Celso Ad. Castillo, and comedy king Dolphy.

A slide presentation accompanied by an upbeat movie theme drew spontaneous cheers from the audience. Aunor cried at this point, especially during the portion for O’Hara, who had directed her in several films. “He was always around for me, good times and bad,” the actress said.

Ed Instrella, manager of honorees Jose and Picache, noted that the annual tribute has become a ritual for the indie community. “I’m looking forward to next year’s Indie Bravo! awards.”

The program started with a performance by indigenous musician/film scorer Diwa de Leon, who worked on “Busong,” one of the cited films. De Leon performed music from Solito’s latest film, “Baybayin.”

Mendoza thanked the Inquirer for its support, which “serves as our strength and inspiration to continue this joyful struggle to preserve and promote our culture.”

Bautista called the Inquirer “our enthusiastic partner” in helping Philippine cinema grow. He explained: “Our job as filmmakers is to create cinema so we can contribute to the growth of the audience and society at large. As a wise man once said: When society is ready for cinema, it is ready for the finer things in life.”

Mainstream movie and TV director Jun Robles Lana, honored for the Cinemalaya drama “Bwakaw,” jested that he had gone indie so he could win a stuffed toy of Guyito.

Chris Martinez, scriptwriter of “Ang Babae sa Septic Tank,” said he was “humbled to be the first scriptwriter to be honored with an Indie Bravo!” Martinez read the prepared speech of honoree Eugene Domingo, who received a best actress award in France last weekend. She fell sick upon her return to Manila and couldn’t make it to the event.

Leyco “never imagined that my thesis film (‘Ex Press’) would get this far.” He thanked the Inquirer profusely.

Will Fredo, honored for “The Caregiver,” pointed out: “The biggest problem of indie filmmakers is marketing and promotion. The Inquirer always responds to our calls and messages, no questions asked.” He noted that the relaxed mood at the gathering was perfect “for simply enjoying one another.”

Fredo had flown in from the United States—like Ron Morales (honored for “Graceland”), who stayed in the country for just 48 hours, flying back to New Jersey the morning after the program.

On Tuesday afternoon, US-based Bautista flew to Dubai where “Harana” is in competition. Mendoza also traveled to Dubai for “Thy Womb.”

She recounted that the section decided to be the conduit between the Filipino audience and indie filmmakers seven years ago, when most people were still skeptical about the movement’s prospects.

“That decision has been validated,” Velarde said, adding:  “Every text message, every e-mail from you about another victory, another invitation to a film fest abroad, another worthwhile project just started, is like a shot of vitamins for us.”

Every bit of news, Velarde said, was “always quickly and enthusiastically disseminated via four platforms—Twitter, Inquirer.net, Radyo Inquirer and the Philippine Daily Inquirer.”

In his welcome speech, publisher Raul C. Pangalangan said, “It’s a unique time for filmmakers … [one that] presents an opportunity for reform. It is my hope that the indies will foster change in the mainstream industry as well.”

Santos broke upbeat news. “We are witnessing the advent of the full revival and resurgence of the film industry,”  he said. “From 23 films distributed two years ago, the number is up to 63 this year.”

Letty Jimenez-Magsanoc, Inquirer editor in chief, summed up the evening’s mood in her thank-you address: “We applaud your courage and your commitment. Bravo, indies!”