It felt like an out-of-body experience. Not that I’ve had one, but it was weird in a nice kind of way. 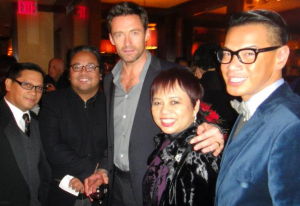 I was totally gushing, or should I say, slobbering. I told her how great she was and how her singing moved me to tears. I showed her a copy of The FilAm on my iPhone.

“Thank you for the review,” she said, smiling. I pinched myself to

make sure I wasn’t dreaming. I was wide alert. I could hear my friends

and fellow journalists Ruben and Janet Nepales and Momar Visaya

calling my name asking if we could all join Anne in a group shot.

It was a moment: Coming face to face with the Hollywood stars of a

movie I had just reviewed. Thanks to Ruben and Janet of the Hollywood

So there I was, body crunching with the stars, artists and technical staff of Les Miz in a packed dining room: Hathaway, Hugh Jackman, Russell Crowe, Amanda Seyfried, Eddie Redmayne, Samantha Barks and yes the notoriously funny Sacha Baron Cohen who played the innkeeper Thenardier.

The Filipino “delegation,” led by Ruben, chatted with cast and crew. They talked about their funny and difficult experiences during filming. I learned that Jackman (as Jean Valjean) didn’t get a double when he carried the hefty Eddie Redmayne (Marius) on his back in the film’s sewer scene.

Jackman would later offer a toast to producers Universal Pictures and Working Title Productions and call director Tom Hooper “a genius.” He announced he was going to sing a song. Then he asked Seyfried to stand on a chair and serenaded her with a “Happy Birthday” song. The crowd roared.

It was my first meet-and-greet with Hollywood A-listers. I was in awe. Totally. Hmm, let’s see now. I think I’d like to review the “Twilight Saga.” Taylor…Robert?