Every little ‘Sting’ does is magic 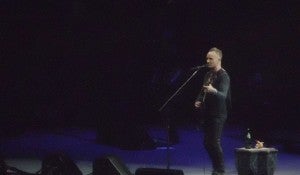 HOW FRAGILE WE ARE Sting lifts the spirits of Filipinos reeling from the loss of Manny Pacquiao and trauma brought by killer Typhoon Pablo. Totel V. de Jesus/INQUIRER.net

MANILA, Philippines—A few hundred meters from New York Street in Cubao, an Englishman made thousands of Filipinos happy for one night.

Wearing tight black leather pants and gray sweat shirt, international rock icon Sting seduced and buoyed up the spirit of Filipinos (mostly reeling from the loss of Manny Pacquiao and the post-Typhoon Pablo traumas) and foreigners alike who gathered at the jam-packed Smart Araneta Coliseum on Sunday night for his “Back to Bass Tour” concert.

Surprisingly despite being a Sunday, there was heavy traffic on Edsa and MRT trains had sardine can-packed couches. But latecomers like Piolo Pascual (seen at the Red Gate with a good-looking male and a female companion) didn’t miss a thing because there was perennial front-act local artist Aiza Seguerra and her band who played a little past 8 pm.

Sting (real name Gordon Matthew Thomas Sumner) took the stage at around 9 p.m. with the lively “If I Ever Lose My Faith In You” and immediately followed by “Every Little Thing She Does Is Magic,” two hits from The Police, the new wave-ska-rock-reggae inspired band he fronted from 1977 to 1983.

If Araneta Coliseum were a bowl of rice crops, there’d be grain spillage all over Cubao as the more than 10,000-strong crowd danced and sang to The Police’ and Sting’s solo hits. More famous titles we jotted down included “Englishman in New York,” “King of Pain,” “Can’t Stand Losing You,” “Message In A Bottle,” and “De Do Do Do, De Da Da Da.” 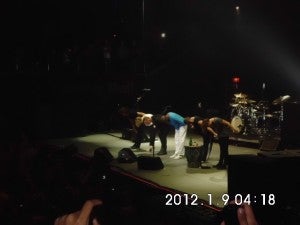 Not really the final bow as Sting did about three encores. Totel V. de Jesus/INQUIRER.net

Sting made sure the crowd took some breather by playing a few of his slow pieces.

A few we saw having a mad dash to the comfort room or a having a quick snack at the refreshment stalls round the hallway of The Big Dome.

Then of course most awaited was the classic “Every Breath You Take.”

For teenagers learning how to play guitar in the late 1980s, “Every Breath You Take” was the next favourite piece after graduating from the basic three-chord C-G-F or Em-D-A patterns of songs by The Beatles, Bee Gees and America.

This bass-driven hit from The Police’s last studio album “Synchronicity” (1983) was sort of a magical spell that will surely drive girls crazy on prom night at a time when everybody wanted to dance and look like, ugh, Aga Muhlach or sing like Raymond Lauchengco.

The Police before their break-up in the mid-1980s was composed of drummer Stewart Copeland (considered one of the fastest drummers in rock history), guitarist Andy Summers and the enigmatic bass player-composer Sting.

As critics would have observed, if not for Sting’s sensibility as composer, The Police could have been another 1980s new wave band whose songs bordered on teenage love and obsession with the opposite sex.  “Every Little Things She Does Is Magic,” “Can’t Stand Losing You” and even the major hit “Every Breath You Take” have very self-explanatory messages soaked in beer bottles. 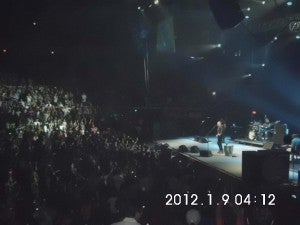 As a solo musician, Sting has received almost all the awards besides the Grammys.  He’s been known for supporting advocacies related to human rights and for the protection and preservation of the environment.

That night at the Araneta, he did about 20 songs including three encores and dedicated his finale “Fragile” to the victims of Typhoon Pablo.

Everyone sang and didn’t find it hard to relate to the lyrics:

“If blood will flow when flesh and steel are one

Drying in the colour of the evening sun

Tomorrow’s rain will wash the stains away

But something in our minds will always stay…

…On and on the rain will say

But this third encore was not meant to send the audience teary-eyed on their way out of the Big Dome. It was rather meant to pacify the raging happy hormones of the energetic crowd who kept on asking for more.

VIPs in the crowd are among the who’s who in business, politics and entertainment. 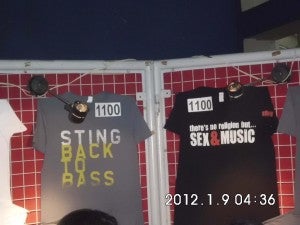 T-shirts for sale outside have an intriguing message, “There’s No Religion… But Sex & Music”. Totel V. de Jesus/INQUIRER.net

On our way to the comfort room, we almost bumped into Cebu Pacific’s CEO and president Lance Gokongwei and friends. At the patron seats we saw among the singing and dancing crowd Philippine Airlines’ honcho Michael G. Tan and family. There were actors Iza Calzado, Edu Manzano, couple Judy Ann Santos and Ryan Agoncillo, among others.

After the show, we saw Senator Bongbong Marcos (in jeans, shirt and rubber shoes) and friends finding their way out.

Unlike in previous shows of foreign acts at the Araneta, there were no President Aquino and ousted Chief Justice Renato Corona sightings.

“Every Breath You Take” could have been given an exciting political color.

TAGS: “Back To Bass Tour”, Rock concert, sting, The Police