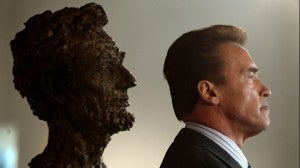 In this Feb 11, 2009 file photo, former Gov. Arnold Schwarzenegger and a bust of Abraham Lincoln are seen in profile during a celebration of Lincoln’s 200 birthday held at the California Museum of History, Women and the Arts in Sacramento, Calif. Schwarzenegger, who came to office during California’s historic 2003 recall election, will soon be releasing his autobiography, “Total Recall: My Unbelievably True Life Story.” AP

LOS ANGELES – Arnold Schwarzenegger says his wife, Maria Shriver, was told to “snap out of it” by her mother for her attempts to persuade him against running for California governor in 2003, a conversation that ultimately opened the door to his successful candidacy.

Eunice Kennedy Shriver told her daughter that her husband would be “angry for the rest of his life” if she stopped his ambitions, Schwarzenegger writes in his new autobiography, “Total Recall: My Unbelievably True Life Story.”

The former governor says in the book that he had decided against running to recall Democratic Gov. Gray Davis after his wife implored him not to for the sake of their family. Maria Shriver announced his decision to their four children.

But he writes that when Maria Shriver told her mother about her efforts to thwart Schwarzenegger’s political ambitions, Eunice told her daughter that women in their family “always support the men when they want to do something.” Schwarzenegger says he didn’t know about the conversation at the time, but learned of it later. Eunice Shriver was the sister of President John F. Kennedy and Senators Robert F. Kennedy and Edward Kennedy.

Maria Shriver then softened her stance, paving the way for Schwarzenegger to announce his candidacy on “The Tonight Show with Jay Leno,” where he says he felt most comfortable.

The announcement came after a week of wavering. Schwarzenegger says before he headed to the TV appearance, his wife handed him two pieces of paper with talking points she had written: one in case he decided to run, another in case he decided not to.

He writes that Shriver went on to become a key ally and adviser to his campaign and eventual governorship.

Schwarzenegger has often said that Maria’s mother and her father, Sargent Shriver, were essential to his eventual decision to seek public office, and the most “extraordinary human beings I’ve ever met.” But he also writes in the book that he often teased his wife that the close-knit Democratic Kennedy clan was “like a bunch of clones” because there was such conformity among them.

A spokesman for Shriver, Matthew DiGirolamo, declined to comment on the contents of the book. Shriver died in 2009.

“Total Recall” will officially be published next week. The Associated Press purchased an early copy.

Schwarzenegger also writes he had a “hot affair” with Danish actress Brigitte Nielsen at a time he and Maria Shriver were dating and already living together.

Schwarzenegger and Nielsen co-starred in the 1985 action film “Red Sonja.” Nielsen wrote in a memoir published last year that she and Schwarzenegger had an “outrageous affair” while making the movie and that she didn’t know until later that he was involved with Shriver.

In “Total Recall,” Schwarzenegger writes that he knew the fling with Nielsen wouldn’t last and in fact it only made him realize that he wanted to marry Shriver.

The book is part of an effort by the onetime “Mr. Universe” and Hollywood action star to rebrand himself after leaving office with a mixed record and subsequent embarrassing revelations about an affair he had with the family’s housekeeper. Schwarzenegger, who fathered a son with the housekeeper, says he also let the boy down.

Schwarzenegger, 65, said he avoided telling his wife for years about the boy, who is now a teenager, even when Shriver asked him, partly because of his longtime penchant for secrecy, and his fear that the news would become public and undermine his political career. He told his wife in January 2011, when she confronted him the day after he left office.

In an interview with the TV news magazine “60 Minutes” scheduled to air Sunday, Schwarzenegger said having sex with his housekeeper was “the stupidest thing” he ever did to his now-estranged wife and caused great pain to her and their four children. CBS aired excerpts of the interview Friday.

“I think it was the stupidest thing I’ve done in the whole relationship. It was terrible. I inflicted tremendous pain on Maria and unbelievable pain on the kids,” Schwarzenegger tells “60 Minutes.”

Shriver filed for divorce in July.

In his book, the usually ebullient Schwarzenegger admits to some loneliness, even though he packed his schedule with speeches, projects and movie-making after Shriver and the children moved out of the house. He said his career had been fun for 30 years because he shared it with Maria.

They had done everything together, he writes.

The former California governor also writes about a 2003 White House meeting with Karl Rove in which the top Republican strategist told him the recall would not happen and instead introduced the actor to then-national security adviser Condoleezza Rice as his pick to run for California governor in 2006.

He asks, “How could Rove have been so wrong?”

Rove’s office said he was traveling Friday and could not be reached for comment.

“She has stated many times in the past that she has no desire to run for public office and those sentiments have still not changed,” Godfrey said in a statement emailed to The Associated Press.