Black Keys, Neil Young, others to perform in NYC 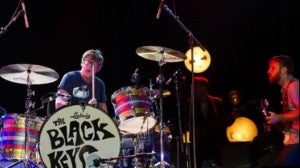 Musicians Dan Auerbach (R) and Patrick Carney of The Black Keys perform during the Rock-en-Seine music festival on August 25, 2012 in Saint-Cloud, near Paris. AFP FILE PHOTO

NEW YORK – K’naan kicked off a free concert in Central Park on Saturday evening that also promised performances by the Black Keys and Neil Young to call attention to poverty worldwide.

Dubbed the Global Citizen Festival, the concert lineup also featured Band of Horses and Foo Fighters. Video of the event was streamed worldwide as about 60,000 music fans poured into the park.

The concert was scheduled around the meeting of the United Nations General Assembly in New York this week and organizers used an innovative approach to ticket distribution so that many concert-goers had no choice but to learn about an array of global problems such as polio, malaria, child mortality and clean drinking water.

Anyone wanting free tickets had to register at globalcitizen.org, which then required users to watch videos or read information about poverty-related issues. Each time material was consumed, users could earn points toward a drawing for tickets. Points were also accumulated by sharing information via Twitter or Facebook.

“Our social media campaign has been off the charts,” said Hugh Evans, CEO and co-founder of the Global Poverty Project. The approach demonstrates a new model for harnessing digital tools that may be repeated for other big events with political or social messages.

Organizers said more than 71,000 people had signed up online, resulting in more than 3.5 million page views. On average, they spent just over six minutes consuming content or sharing information. Nearly 200,000 pieces of information were shared on Facebook, and just a bit more than that on Twitter. About 170,000 people signed petitions via the site, and there were 98,000 videos viewed to completion.

Evans said the project achieved its goals, set out last year, of getting more than 100,000 people to take action related to extreme poverty while telling a new story about the challenges. To that end, the site conveys information in detailed, documentary-like accounts and uses an array of video, graphics and stories that are friendly for mobile and digital consumption.

Financially, he said, the project also achieved its yearlong goal — working with an array of organizations like the U.S. Fund for UNICEF, the Earth Institute and Rotary International — of garnering $500 million in commitments to help fight poverty.

Evans said that he’s hoping the audience, built online and at the concert, will continue efforts by tweeting President Barack Obama and Republican challenger Mitt Romney to halve extreme global poverty by 2015, which is the key U.N. anti-poverty goal. And Evans is working on an announcement in October or November about “a major rock band” getting involved with the anti-poverty efforts.