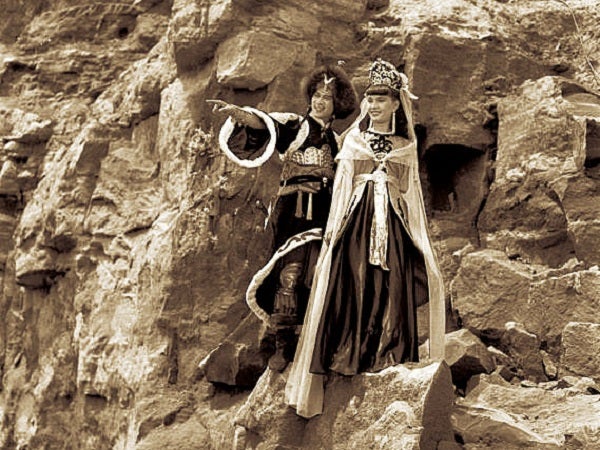 Final scene of “Genghis Khan” (Manuel Conde) was shot in Guadalupe, Makati, at the corner of Edsa and Pasig River. CONTRIBUTED PHOTO FROM THE BOOK “THE CINEMA OF MANUEL CONDE” BY NICANOR G. TIONGSON

The repatriation of Conde’s film from the Venice International Film Festival archives formally opened the National Film Archives of the Philippines.

“My heart is bursting with happiness…that you took care of my father’s film,” said Jun Urbano, son of Conde, to the government agency that initiated the move.

Urbano is known for his comic character Mr. Shooli in the hit TV series of socio-political satires titled, “Mongolian Barbecue” in the 1990s.

Urbano recalled how in the 1950s, his father turned the cemetery in Angono, Rizal, into Mongolia for some scenes in “Genghis Khan.”

Shown in Venice in 1952, “Genghis Khan” is the considered one of first Filipino films that put the Philippines on the world map.

For film buffs, a quick check on YouTube, however, would reveal an uploaded rough copy divided into six segments.

Conde was given a posthumous National Artist Award for Film in 2009. The conferment is still pending at the Supreme Court following the controversial decision of then President Gloria Macapagal-Arroyo to include some names allegedly she favored, two of whom were director Carlo J. Caparas and government official Cecile Guidote-Alvarez.