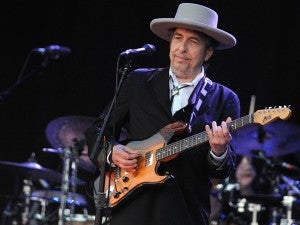 UNCASVILLE, Connecticut—At an age when many men are worrying about hip replacements, Bob Dylan can still set a stadium alight — and even shake his hips.

In concert Saturday at the Mohegan Sun Arena in Connecticut, the 71-year-old American folk legend strutted and sauntered, singing, playing guitar and piano, and letting rip on his famous harmonica.

Not that the performance was flawless. Far from it.

Dylan’s voice, never known for smoothness, gave the impression of coming from the bottom of a rock-filled barrel. From the upper rows of the approximately two-thirds full, 10,000 seat indoor arena, his brilliant lyrics were unintelligible.

“Tangled up in Blue,” “You Aint Going Nowhere,” — the rhythms and bitter-sweet tunes of classic Dylan songs came through, but not a lot else.

“Have you understood a word he’s saying so far?” one concertgoer asked others around him, prompting a shaking of heads.

“That’s what happens when you age,” Jami Hamilton, a 27-year-old fan wearing a fedora with a feather in the hatband, replied, comparing Dylan to a “baby bird” trying but failing to take off.

Still, wearing a broad-rimmed hat and dark trousers with a white stripe down each leg, the old master, whose 35th studio album, “Tempest,” goes on sale Tuesday, proved he hasn’t lost the magic.

About five songs in, Dylan emerged from his vocal cave and the mostly middle-aged fans rose to their feet. As he sang “it’s not dark yet, but it’s getting there,” a few began dancing in the aisles.

This wasn’t Bob Dylan of yesteryear, but it was evocative. A happy audience member turned the clock back a little more — and risked being thrown out — by smoking marijuana.

Five decades on from the release of his debut album, Dylan worshippers are used to coping with the singer’s inconsistencies.

Almost an international institution, the one-time rebel of Greenwich Village has no compunction about playing in places like the Mohegan, located in a gargantuan casino on an Indian reservation in Uncasville where punters gamble their money away or stagger around drunk among a decor of fake wolves and waterfalls.

Taking the stage, Dylan didn’t even bother with a “hello Uncasville” for the adoring crowd. When he left, the most he could manage in return to the appreciative whistling and shrieking were a few nods.

But judging by glowing reviews for “Tempest,” Dylan’s song-writing and lyrical powers are as strong as ever. His voice may be shot, but the edginess, even downright Biblical drama, of the music endures.

And judging by the old man’s energetic, multi-tasking stage presence, he still intends to deliver. He might even be improving.

Will Asman, 29, said he got into Dylan through his father and has attended more than 50 concerts since 1997. It’s only in the last four years or so, he says, that he noticed the elderly Dylan move around so much on stage.

“Him doing all those gyrations, that’s new,” Asman, a courier, said.

Another concertgoer, 43-year-old actor Kevin Corrigan, said Dylan remains authentic in a way the other wrinkling superstars of rock’s golden age are not.

“You know, casinos and music don’t go together,” he said. “But when it came to ‘Not Dark Yet,’ I was completely blown away. There’s people like Paul McCartney and the Rolling Stones, but no one goes to see them with any expectations. No one expects them to do anything new. Dylan, though, people still hold him to artistic standards.”

Asman said he’s pre-ordered “Tempest” and he would not be surprised if there are more albums to follow.