3 awards for ‘Thy Womb’ in Venice Film Fest 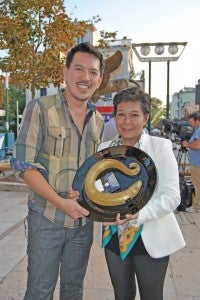 VICTORY IN VENICE Director Brillante Mendoza and actress Nora Aunor show off one of the awards of “Thy Womb.” ALVIN UMAHON/CONTRIBUTOR

Everywhere she went in Lido, Filipino actress Nora Aunor was greeted by admirers—clapping, cheering and congratulating her for “Thy Womb” (Sinapupunan), which won three honors at the 69th Venice International Film Festival over the weekend.

Aunor, considered a superstar in the Philippines, told the Philippine Daily Inquirer in Filipino: “The Italians kept saying: ‘Bellissima! Bravissima!’”

Producer Larry Castillo said the critics adored Aunor who won the Bisato D’Oro prize for her performance. Castillo told the Inquirer that Aunor’s award was given by Premio della Critica Indipendiente, an independent critics’ group.

Previous recipients of the award were directors and producers. Aunor is the first actress and Filipino to win the prize.

Aunor recalled that the Bisato D’Oro ceremony was held on Friday at Bar Maleti, a restaurant near her hotel.

The Philippine contingent stayed at the Hotel Excelsior Venezia in Lido, Venice.

“I am happy that our film was invited to Venice. It’s a great honor just to be included in this year’s lineup. To win an award is a wonderful bonus,” Aunor said of her award.

She said the critics were touched by the film. “They told me that they cried, especially toward the ending. They said they were moved by the emotions I showed in the movie.”

On Saturday morning, Mendoza received La Navicella/Venezia Cinema prize—one of the collateral awards handed out before the fest’s major honors.

According to the Venice website, the award is given by critics and the Rivisita del Cinematografo, an Italian publication. “La Navicella is awarded to the director of a film considered particularly relevant for the affirmation of human values,” an online report said.

A previous winner of the La Navicella award was Kathryn Bigelow’s “The Hurt Locker,” which went on to win an Oscar in 2010. Other past winners of the prize included such heavyweights in world cinema as Louis Malle, Zhang Yimou, Stephen Frears and Abel Ferrara.

The Navicella jury commended the Filipino film “for giving voice to the Badjao community in a respectful and emotionally involved manner.”

In the film, Aunor portrays a barren Badjao midwife searching for a suitable woman (Poe) who can bear a child for her husband (Bembol Roco).

In the citation, the Navicella jury praised the film: “Although … ethnographic, the film goes beyond naturalism and turns into poetry. Mendoza brings to the screen an act of total love which stands out today as true scandal against frivolous provocation.”

Established in 2007, the P. Nazareno Taddei Award was named after a Jesuit priest. It is given to films that “express authentic human values.”

The Hollywood Reporter critic Neil Young considered Aunor one of the front-runners for the best actress award, which went to Israel’s Hadas Yaron of “Fill the Void.”

Although it failed to bring home major awards, “Thy Womb” received a rousing ovation after its premiere on Thursday and was showered with glowing notices by critics.

Mendoza, who won best director in Cannes for the graphic crime drama “Kinatay” in 2009, said his goal in making “Thy Womb” was to tell a story of “unconditional love set in a beautiful but troubled place.”

Mainstream publication Variety gave the film a positive review, praising the cinematography (by Odyssey Flores), acting (by Aunor) and production design (by Mendoza).

Variety’s Guy Lodge said “Aunor’s softly crinkled face beautifully registers the internal pain of her every decision in this curious process.” Lodge said the cinematography “negotiates picture-postcard skies and grubby boltholes with equal fluidity” and the production design “forges the unusual story with just the right balance of the exotic and the authentic.”

Variety pointed out that “Thy Womb” had more in common with Mendoza’s Venice entry in 2009, “Lola,” than the “propulsive” “Captive,” which was the “hard-working Filipino provocateur’s” entry at the Berlin fest earlier this year.

CineVue’s Jo-Ann Titmarsh called the film “one of the most poignant and intimate films at this year’s Venice fest … a moving and visually captivating movie with two commanding yet understated central performances.”

“Thy Womb” also has screenings in the Toronto International Film Festival this month (on September 7, 9 and 16).

On the fest’s website, Toronto programmer Steve Gravestock raved about Aunor’s “moving portrayal of a woman determined to provide her husband with a child.” He also pointed out that Roco was “equally good as her stoic husband.”

Gravestock noted that Mendoza’s direction possessed an “unfailingly keen eye for detail and attention to the rhythms of rural life.”