No social life for Leo during ‘King and I’ run 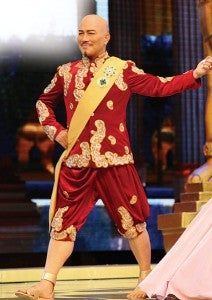 LEO VALDEZ as the King of Siam: “Now that I’m very deep into the role, I need complete quiet at home after rehearsals.”

When people ask me how Leo Valdez and I became close, I tell them that we just clicked instantly. He’s never too busy to be a friend. But even if I know Leo so well, I am still in awe every time he performs onstage.

There’s always something new to marvel about Leo the thespian. Yet Leo as a friend remains the same after every critically-acclaimed performance.

Many awards after, Leo is not one to sit on his laurels. “The Engineer” is out to mesmerize us again, this time as the King of Siam, in Resorts World Manila’s production of “The King and I,” which opens Sept 15 (call 8366333 or log on to www.rwmanila.com).

Director Freddie Santos is said to have done a fresh take on the Rodgers and Hammerstein stage musical, which is based on the 1944 novel “Anna and the King of Siam” by Margaret Landon—from the memoirs of Anna Leonowens, who became governess to the children of King Mongkut of Siam in the early 1860s.

Excerpts of my interview with “His Majesty” Leo V:

Who is harder to portray, the King or The Engineer, and why?

They’re both challenging… I thought the King would be harder because he has more lines of dialogue, and I was a singer first and foremost before I became an actor. But I remember that, in musical theater, you “sing the lyrics” to make it sound conversational. In “The King and I,” I just realized that all I needed to do was “speak” the words. The bottom line is, you give the role the “truth” that it deserves.

In what ways can you relate to your role in “The King and I”?

By being in control of situations, whatever they may be, and wanting only the very best outcome. But deep inside, I have doubts, just like the King.

How is the play different from its Broadway version?

“The King and I” at Resorts World Manila has an all-Filipino cast and I’m working with some of the most talented bunch of actors. Considering the multimillion-dollar production cost of Broadway vis-à-vis the multimillion-peso budget of the Manila production, I must say that we are doing alright.

What’s something new you learned about Monique Wilson (who plays Anna) during rehearsals?

I have always admired Monique’s work. Now that we’re working together again after her New Voice Company’s production of “Chess,” I admire her more as someone who is passionate about her work and her personal advocacy for women’s rights.

How do you and Monique avoid upstaging each other, since you both have a compelling stage presence?

Monique and I are blessed with the same passion and attitude on “The King and I.” I believe her doing her best will complement my doing my best.

How do you destress after rigorous rehearsals?

Now that I’m very deep into the role, I need complete quiet at home after rehearsals. My regular 10-km run helps clear my mind as well. I feel I’m one with the universe when I run by my lonesome in the quiet of the night. My social life and other extras take a huge step backwards at this time.

I live on a day-to-day basis. As far as bucket lists are concerned, I would rather have the universe surprise me with more wonderful things to come my way.

What can the public look forward to in “The King and I”?

Aside from its beautiful story and the songs, the Manila production is considered lavish, with costumes and sets personally supervised by our director Freddie Santos. I would like to personally commend Resorts World Manila for continuing its advocacy of supporting and reviving Philippine theater culture. It has spent quite a bit on this production. In one portion alone, “Uncle Tom’s Cabin,” we have dancers from the Philippine Ballet Theater doing that one number.

What has “The King and I” taught you?

I learned that love is the ultimate common denominator. And, on a personal note, the classic saying: “There is (absolutely) no substitute for hard work.”

If you were king for a day, what are the rules you would implement to make our country a better place?

With the ultimate power that goes with it, I will make proactive proclamations that would benefit everyone and get everybody heartily involved.

How can Pinoys be persuaded to watch plays more than they watch movies?

By making musical theater affordable to the public. Many years back, I headlined many shows at the Manila Metropolitan Theater, which were produced by the grand lady, Conching Sunico, with the full support of Imelda Marcos.

They were lavish and beautiful musical extravaganzas, yet tickets were affordable. Theatergoers had a great time. I have a feeling (and I’m hopeful) that Resorts World Manila wants to bring back those bygone days.

What’s the secret to being Leo Valdez?

Wow, you got me there! No secrets to being me. I’m a person who is forever thankful and believes in living and celebrating life… always seeing goodness in everything or otherwise, always looking at the glass “three-fourths” full. I do what I feel I do best, and if I get the next person’s appreciation and respect, that is really more than I could ask and thank God for.