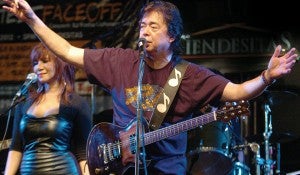 RJ PERFORMS with his regular band, leads the crowd in a sing-along.

Ramon “RJ” Jacinto is most joyful when people sing, dance and feel better because of his music. More than this, the pioneering Pinoy rocker said, he had always wanted to do something that would live on, long after he hangs up his guitar.

At a concert dubbed “The Greatest and the Latest Face Off” last week at Tiendesitas in Pasig City, the musician/businessman formally launched RJ Society of Music. It is an “informal” organization that seeks to provide a regular venue for performers and enthusiasts to play and share their songs.

“I’m at a stage in my life where I want to leave something that will stay, and continue to help musicians even after I’m gone,” RJ told the Inquirer. “It was just a dream 10 years ago, but I’m doing it now.”

Members will gather once a month at the Tiendesitas People’s Village for what RJ calls a “concert meeting.” Some of the finest musicians in the country will be invited not only to perform, but to impart knowledge of their craft.

“Remember having family parties where everyone has a blast singing and dancing? That’s what RJSOM is going to be like,” he said. “There will also be workshops and seminars … like a 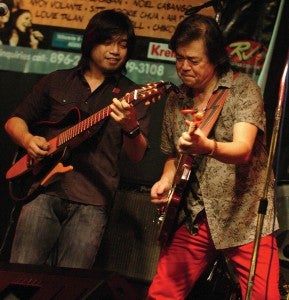 Once it gets more members, the concert meetings will be held weekly, RJ said. The first one is set Sept. 15.

RJ believes that this gathering could become a platform for discovering new talents.

There are lots of untapped, talented bands and artists in the country, but not many of them can afford to buy instruments, or have access to playing facilities, RJ lamented.

“I’d like to set up band rooms in barangays all over the Philippines,” he said.

RAIMUND Marasigan replicates his vocals on “Ligtas,” which appears on the “RJ Duets” CD.

RJ has been performing professionally for more than 50 years. And while it’s important to keep up with the times, he stressed, an artist should stay true to his foundations. “My music is what I am. I have to be sincere,” he said.

His sound, a fusion of classic rock ’n’ roll and R&B, was influenced by the likes of The Ventures, The Beatles, Elvis Presley, The Beach Boys, Eric Clapton, George Benson and Little Richard.

It’s a style that meshes well with other genres, and effortlessly complements artists old and new. This, RJ proved when he and special guests treated the beer-drinking crowd at Tiendesitas with songs from his 24-track album, “RJ Duets” (MCA Music) such as “Lonely Teardrops” with Nyoy Volante, “Sugat ng Puso” with Noel Cabangon, “Nosi Ba Lasi” with Aia de Leon and “Ligtas” with Raimund Marasigan.

In red pants and sneakers that matched the color of his guitar, RJ rocked the house with Ely Buendia via their original collaboration, “Presyo,” and then prompted a crowd sing-along with the Everly Brothers’ “Bye Bye Love.”

Everyone got into a dancing mood when Rene Garcia of Hotdog joined RJ and dished out a mash-up of “Trip to Manila” and “Manila.”

Cooky Chua gave delightful renditions of Pat Benatar’s “Hit Me with Your Best Shot” and The Pretenders’ “Brass in Pocket.”

NOEL Cabangon renders his own take on “Sugat ng Puso,” an RJ original that they recorded together.

The final number, the Eagles’ “Hotel California,” featured a bit of guitar-shredding improvs from Garcia, Chikoy Pura of The Jerks, and Louie Talan and Tirso Ripoll of Razorback.

The show lasted for more than two hours, but RJ still looked good for a couple more songs. He couldn’t imagine himself doing anything else, he said. “I’ll play music as long as I can move!”