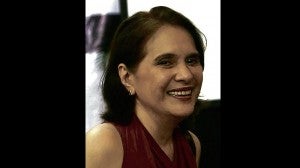 GOMEZ. The beauty queen was an activist.

Last Thursday, I received a text message from Princess Nemenzo, who relayed the sad news that Maita Gomez had passed away in her sleep. I was saddened by the news, as were other kasamas, who had worked with the former beauty queen and activist.

I relayed the news to Susan Macagbua and to other friends, who were shocked because they didn’t know she was ill (she was diabetic, and she also smoked too much). We went to the wake the following day, because Maita’s son, Michael Beltran, “requested” friends to skip the first night since the family still had to make arrangements with Manila Memorial Park.

When we went to the wake, Maita was lying on a bed of yellow roses, because she once said she did not want to be in a coffin –and she looked like a Disney princess! We were with Susan’s husband, Macky, as well as Gintong Silahis member, Dan Santiago, and his wife, Cora. We were all shocked and saddened by Maita’s sudden demise.

Tita Lubi was tasked to arrange the rites honoring Maita the next night. She asked me to speak. I hardly ever talk at such rites, so I asked instead if I could bring tenor Dondi Ong to render an appropriate song. When I got home, I wrote a speech and called Tita that I would speak, after all.

At the wake, I met other friends like Paulynn Paredes Sicam and Carol Pagaduan Araullo. Also there were Dodong and Princess Nemenzo, Satur and Bobby, Bien and Shayne, and Heber Bartolome, as were Lidy Nacpil and her sister, Manjet Lopez.

I also bumped into Monique Wilson who, in honor of Maita, sang an a cappella version of a Beatles classic. After Dondi sang, I gave my speech. Here are excerpts:

Maita Gomez aka Margarita Favis Gomez was a byword in Manila society in the ’60s, before she became a byword in radical activism in the ’70s.

Maita was very tall, very beautiful and very intelligent. Thus, Manila’s elitist society pampered her first as a “society model,” then as a beauty queen (who competed in the Miss World pageant in London).

Manila’s social set was surprised when Maita married, and was aghast when she enrolled at UP and became an activist (she belonged to a moderate group called Aleithea). She was attracted by the slogan: Serve the People!

When martial law was declared in that “September of our lives,” Maita was allegedly arrested in Baguio. It was gossiped about that the articulate activist convinced her military-captor to help her escape and join the armed struggle in the mountains.

Maita was jokingly referred to as “the other Gomez” since, like Rita, the dramatic star of Sampaguita Pictures, she had children by different men. She and I became close in the ’80s when we worked together for women’s causes.

The ex-beauty queen was an active Gabriela member. On the other hand, the late Odette Benito Alcantara bemusingly once said I was a member of Gay-briela. Through the years, Maita remained in the news, because her daughter, Melissa, decided to follow in her footsteps as a model.

When Maita took up her Master’s degree, she was cowed by a crucial exam – so, she decided not take it. But, I convinced her to take the risk – and she passed it! Months later, she thanked me for her degree.

Maita was also known as the “other beauty queen” in the movement—the other one being dusky Nelia Sancho, a former Queen of the Pacific titlist. We admired them because they were willing to forsake their titles to “Serve the people!”

We will miss you, dear Maita. Mahal ka ng bayan!