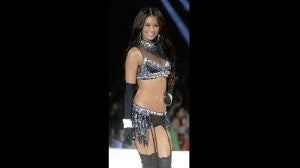 Even before the main show began, a lot of the guys who attended the recent FHM 100 Sexiest Women victory party had already had their fill of ogling and flirting with scantily clad models—thanks to the many “specialty” booths inside the World Trade Center in Pasay City.

It was one of the rare times you’d see hordes of grown men acting like giddy teenagers and photographers doing more posing than shooting.

On the other side was the House of Pleasure. The closed-door booth was decked with the words “slaves” and “vamps.” Curious, we asked one of the girls stationed outside what was going on inside.

“From what I’ve heard, you may just see a bit of girl-on-girl action,” she said.

Well, that explained the long lines.

Beside the House of Pleasure was a mini stage where men could have the pleasure of dancing with skin-baring girls behind sheer, white curtains. One guy couldn’t contain his excitement at the prospect of being surrounded with gyrating bodies. He almost tripped on his way in.

The fun on the grounds continued until the sound of sirens, accompanied by seductive moans, blared across the venue, signaling the start of the show. Soon, a bevy of long-legged models was parading in flimsy gowns with very little underneath. 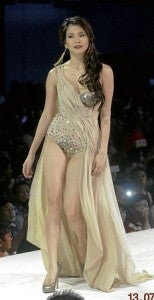 Then followed a group of petite girls dancing out of sync. But the skimpy school uniform they had on more than made up for their rather stiff moves. When the sexy traffic patrollers took the stage, the guy beside us couldn’t help himself and blurted out, “Miss, I have committed a violation!”

But what really had the crowd going and whistling wildly were buxom babes who walked down the runway with nothing covering their busts but pasties and sprinkles of glitter.

At that moment, we found ourselves in a sea of hulking zoom lenses, craned necks and a few open mouths.

That, it turned out, was just the appetizer.

Opening the main event was 2003 Sexiest Woman Diana Zubiri. The 27-year-old actress looked every inch like a goddess in a white gown with a slit that just went on and on.

It was a relatively tame look for her, really, especially for those who remember her bikini-clad image on the Edsa-Shaw flyover. Still, the sensuality Diana radiated was undeniable.

We didn’t recognize LJ Reyes right away. That night she was a jungle vixen, sauntering and dancing confidently onstage. She waved to the crowd and flashed a bewitching smile that coaxed out her cute dimples.

Some of the loudest cheers we heard that evening came when Michelle and Ehra Madrigal took the stage. The elder sister was voluptuous but angelic-faced; the younger one, svelte and strong-featured. In the end though, it was Michelle’s seductive and knee-weakening stare that had the crowd roaring for more.

The rest of the 100 Sexiest Women event was a blur. We wanted to see some of the big names who made it to this year’s top 10—Angel Locsin, Solenn Heussaff, Cristine Reyes, Marian Rivera, Jennylyn Mercado and Lovi Poe—but they were no-shows.

Finally, FHM No.1 Sexiest Woman Sam Pinto marched down the ramp in a bejeweled black outfit, which woefully left a lot to the imagination. She neither danced nor did any cutesy antics like some of the other girls did. We couldn’t complain. Her megawatt smile alone drew raucous cheers from the testosterone-heavy crowd.

Read Next
In the thick of things, but moving on soon
EDITORS' PICK
Here’s How Protein and Calcium Deficiency Can Affect Your Kid’s Health
Mallorca City: Home of Cavite’s finest industrial hub
Puno: ABS-CBN can’t continue operating without new license
Edsa rites ‘solemn and quick’ as Du30 seeks end to ‘petty’ rifts
Wilder says costume wore him down before Fury did
Strongmen will never succeed–Robredo
MOST READ
Puno: ABS-CBN can’t continue operating without new license
Sarah Geronimo, Matteo Guidicelli return to public eye after controversial wedding
Dominguez: ABS-CBN account on unaired ads ‘does not tally’ with Duterte campaign experience
‘Time is everything’: World braces for spread of new virus
Don't miss out on the latest news and information.