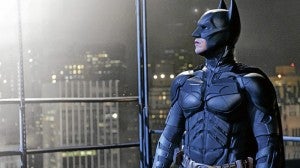 CHRISTIAN Bale in ‘Dark Knight Rises,’ which makes ‘The Avengers’ feel like a comedic trifle.

Long and distinctive is the shadow cast by director Christopher Nolan over the Batman franchise. Massively high then are the expectations for “The Dark Knight Rises,” the coda to Nolan’s “Dark Knight” trilogy.

No one expected exactly how Nolan, then best known for the mind-twisting “Memento,” would reinvent DC Comics’ iconic Batman, especially after Tim Burton’s whimsical take on the cowled hero in 1989’s “Batman.”

Nolan purposefully pulled Batman from the gaudy 1990s as 2005’s “Batman Begins” wowed audiences with its grim and ferocious take on the Batman with Christian Bale in the lead, a Batman who felt real and intimidating.

The no-nonsense Nolan topped even that with 2008’s “The Dark Knight,” which was one of the most successful movies of all time and generally considered the best comic book movie ever made, winning two Academy Awards.

“The Dark Knight Rises” takes place eight years after the events of “The Dark Knight,” with the Batman unseen since taking the fall for the crazed Harvey Dent’s activities. Bruce Wayne is a recluse but Gotham City is peaceful under the benevolent hand of police commissioner Jim Gordon (the ever dependable Gary Oldman).

That storm strikes with the arrival of the masked and muscular terrorist leader named Bane (an utterly unrecognizable Tom Hardy), who sets out to take over Gotham City with an ambitious and violent plan.

“The Batman has to come back,” Gordon tells Wayne, who answers: “What if he doesn’t exist anymore?” Now the Batman must decide whether or not to emerge from the shadows again to face Bane, and even if he does, will he be enough?

It is extremely difficult to discuss much of “The Dark Knight Rises” without giving away the booby-trapped plot devices of screenwriters Christopher and Jonathan Nolan (together, they wrote “The Prestige”) but suffice to say many a twist lay in wait for the viewer even as the film recalls classic Batman comic book stories, including “Knightfall” which pushed Bane to prominence.

Back in full force 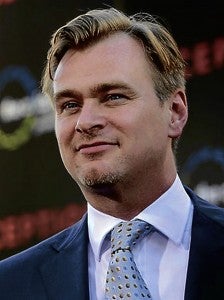 NOLAN takes down his hero. AP

Still enigmatic and tortured, Bale reveals new facets to his Batman, but also lets the story unfold seamlessly around him. Bane makes for a good bogeyman though Hardy is mostly hidden behind his mask.

Nolan has succeeded in making the Batman truly his own and truly substantial. The longest of the “Dark Knight” trilogy at almost three hours, the movie’s emotional heft and storytelling prowess makes the otherwise entertaining “Marvel’s The Avengers” feel like a comedic trifle.

“The Dark Knight Rises” is both cerebral and majestic, with Nolan bringing the Batman full-circle with references to the first two movies, thus unleashing a perfect bookend to his “Dark Knight” trilogy.

Intelligent and thrilling, the must-watch film reaches new cinematic heights for the Batman as it proves to be the best movie of the three—yes, even better than “The Dark Knight.”

Nolan’s final Batman film, “The Dark Knight Rises,” is an epic and triumphant conclusion to the Batman saga that shines brightly even from the darkest shadows.