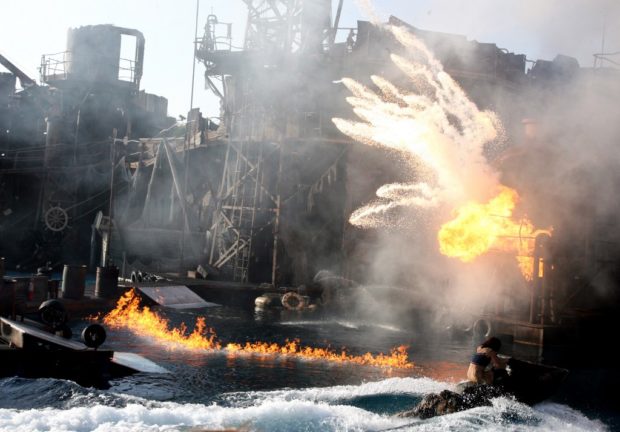 Actors perform in the WaterWorld Stunt Show at Universal Studios in Hollywood, April 9, 2007. An actor was rushed to hospital during a performance of the theme park’s long-running “WaterWorld” live show, a spokesperson said Tuesday, Jan. 24, 2023. AFP PHOTO / GABRIEL BOUYS

The actor was transported to the hospital in Los Angeles following a stunt during an afternoon show on Monday, the spokesperson said in a statement sent to AFP.

“Details surrounding the event are being reviewed,” it added.

The entertainment news outlet TMZ said a male actor dived from a 30-foot platform into a water tank but did not immediately resurface.

Panicked colleagues pulled him out and performed CPR before he was rushed to hospital, where he is still being treated, the website reported.

“It was a full house. It happened in front of everyone,” spectator Daisy Anguiano told a local ABC affiliate.

He appeared to be unconscious while being “dragged from the water,” she said.

“WaterWorld” is a special effects-filled live show based on the 1995 post-apocalyptic action film starring Kevin Costner.

Although the film itself was seen as an expensive flop, “WaterWorld: A Live Sea War Spectacular” opened at the Los Angeles theme park the same year and has remained an enduringly popular attraction ever since.

Around 170,000 pyrotechnic effects are fired per year at WaterWorld, including giant fireballs rising 50 feet (15 meters) in the air, according to the theme park’s website.  /ra

Let’s-a-go (to Hollywood)! First US ‘Super Mario’ theme park to open in Feb.