Let’s-a-go (to Hollywood)! First US ‘Super Mario’ theme park to open in Feb. 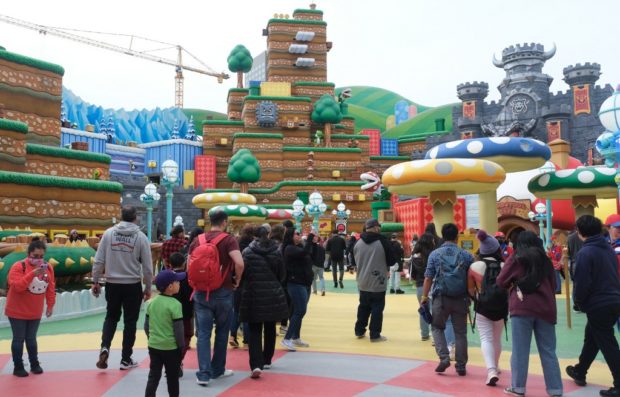 Guests explore during a preview of Super Nintendo World at Universal Studios in Los Angeles, California, on Jan. 13, 2023. Nintendo’s first theme park outside of its native Japan will open in California next month, just weeks before Mario gets the big-screen treatment in a major new Hollywood film. Chris Delmas / AFP

Nintendo’s first theme park outside of its native Japan will open in California next month, just weeks before Mario gets the big-screen treatment in a major new Hollywood film.

Super Nintendo World will be part of Universal Studios Hollywood—an amusement park that is traditionally home to rides based on film and TV franchises from “Waterworld” to “Harry Potter.”

But with the video game industry now eclipsing movies in size, and theme parks using increasingly interactive technology to immerse guests, bosses of the two companies have joined forces to capitalize on the platform-hopping plumber’s global popularity.

Visitors race along a real-life track surrounded by actual set pieces, but can aim and shoot virtual shells at computerized villains they see displayed on their head-mounted, individual visors.

There are also a number of mini-games in which visitors with interactive wristbands can accrue coins and stamps, to qualify for a “final showdown” with the evil Bowser Jr.

“We are known for our film franchises, which are terrific, and they’re very immersive. Games are a different thing.

Nintendo fans have already begun flocking to the Los Angeles amusement park, where word quickly spread last week that the new attraction was admitting visitors for a “soft opening” to iron out any final technical glitches.

“Being here, it’s like my childhood in real life,” said Carlos Moctezuma, who wore a Mario outfit to the park.

“I’ve known Mario since I was in second grade. That was one of my first games on the Game Boy,” said his partner Lexsi Houseman, dressed as Luigi.

The official launch of Super Nintendo World is set for Feb. 17, when visitors surrounded by mechanical Yoshis, Piranha Plants and Goombas from the beloved gaming franchise will be greeted by actors dressed as Mario, Luigi and Princess Peach.

A third Nintendo theme park will follow in Orlando.

The film features US actor Chris Pratt as the voice of Italian plumber Mario—a casting choice which has sparked controversy and criticism on social media, but only drawn more attention to the nostalgia-laden movie.

It will be Hollywood’s second attempt to bring Nintendo’s most famous characters to the big screen, after a widely panned 1993 live-action movie.

The first “Super Mario Bros” game came out in 1985 for Nintendo’s NES console.

The platform game, in which Mario runs and jumps past obstacles to collect coins and save Princess Peach from the evil Koopa turtles, was based on the “Mario Bros” arcade game released earlier.  /ra