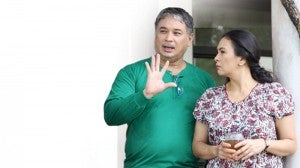 Ricky Davao is no stranger to working behind the camera.

It has been a smooth transition for the acclaimed actor, who now directs the GMA 7 primetime teleserye “Makapiling Kang Muli.”

He recounted that, in the old ABS-CBN horror series “Okatokat,” he had to juggle acting and directing duties. “My co-director was [fellow actor] Michael de Mesa. When he became busy with stage plays, I took over as sole director.”

Working double-time as actor-director in “Okatokat,” which ran from 1997 to 2002, was an enjoyable experience, he related. “It was double the pay, but double the exhaustion, too.”

On the Kapuso channel, he megged a string of shows in quick succession: “Grazilda,” “Sisid” and “Kokak.”

It’s his first time to direct most of the lead stars of “Makapiling,” he said, “except for Sarah Lahbati, whom I previously handled in ‘Kokak.’”

In this new series, however, Sarah is portraying someone totally different from her shy-girl screen persona. She’s now playing an assertive seductress who tries to steal Richard Gutierrez away from Carla Abellana. “But the good thing about Sarah is that she knows what she wants. And she works hard,” said Davao.

He has a simple strategy in handling big stars like Richard and Carla: “I just talk to them … I get to know their likes, dislikes, fears, limitations, strengths and weaknesses as actors.”

He is impressed by Carla’s growth as an actor: “I worked with her as co-star in the afternoon soap ‘Kung Aagawin Mo ang Langit.’ She has matured a lot from her first soap, ‘Rosalinda.’”

He looks up to other actor-directors like Eddie Garcia, Laurice Guillen and the late Fernando Poe Jr.

He wanted to direct Eddie—along with Dolphy, Paquito Diaz and his father, Charlie Davao—in a film about senior citizens. “I got permission from the late [playwright] Rene Villanueva to do the movie version of his play, ‘Hiblang Abo,’” he said. “Unfortunately my dad and Tito Paquito have already passed away.”

He only has one credit as film director so far, an episode in the Gawad Kalinga trilogy, “Paraiso: Tatlong Kuwento ng Pag-Asa,” in 2007.

He acknowledged that he learned a lot from his past directors Lino Brocka, Eddie, FPJ and Laurice.

He worked with Lino, the late National Artist for Film, in movies like “White Slavery” and “Natutulog Ba ang Diyos?”

“Lino loved telling stories on the set,” he recalled. “But when it was time to shoot, he knew exactly what he wanted to achieve.”

After learning from the masters, it’s now time for Direk Ricky to give back—as mentor in the new GMA 7 talent search “Protégé.”

Assigned to take charge of North Luzon aspirants, he said he’s looking for the “next big star, the total package. Someone with the looks and the talent to make it in the biz.”

The audition at SM Pampanga was unpredictable, he recounted.

Direk Ricky is going the extra mile: “I asked the producers if I can bring my contestants to the set of the show that I direct. In workshops, methods and theories are discussed. But on the set, they can see the actual work.”