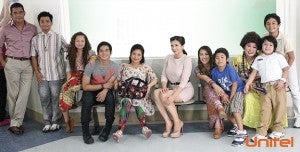 “I DO Bidoo Bidoo” is an inspired film showcase for some of the Apo Hiking Society’s signature anthems.

Most productions come and go with boring predictability, content with making a pile of money and letting most other considerations go hang.

Happily, there are a few shows or films that we can best describe as “event” productions, because viewers look forward to seeing them for the unusual stories, themes or stellar combinations they proffer.

This season, those attention-calling productions are paced by Unitel’s inspired film showcase for some of the Apo Hiking Society’s signature anthems, “I Do Bidoo Bidoo.” Since these songs sum up young people’s thoughts, dreams and aspirations in the ’70s and ’80s, they were practically begging for such a showcase.

Truth to tell, other producers and directors have had the same brainstorm, but it has taken Unitel’s Tony Gloria to make it an eventful reality.

We’re looking forward to viewing the finished film this August, fiercely hoping that it lives up to its great promise and becomes the local movies’ equivalent of “Mamma Mia,” the hit compendium of Abba anthems that triumphed at the box office some years ago.

If the Apo movie is similarly successful, it could lead to other such films, separately showcasing the songs composed by Ryan Cayabyab, Jose Mari Chan, Freddie Aguilar, George Canseco and Gary Granada. Hope springs!

Another major film event coming up soon is the 2012 Cinemalaya indie filmfest. Last year’s edition was eminently successful, fielding a number of outstanding movies that ended up gracing many film festivals abroad.

It’s the height of irony, therefore, that last year’s  Cinemalaya was marred by controversies that sadly ended up detracting from its sterling achievement. We trust that this year’s festival will be similarly outstanding—without the messy negativity that soured its 2011 edition.

We urge all film buffs to patronize this month’s Cinemalaya festival, to help more new filmmakers come into their own, both locally and internationally.

And, while we’re at it, let’s once and for all come up with ways and means for our indie filmmakers to find a regular audience and market for their works, even after the festival has been concluded.

The bottom line is that filmmakers have to make money from the regular screening of their exceptional works, otherwise the promising indie film movement could run out of steam and cash, and its best discoveries will stop making movies.

Other “event” productions that should excite viewers include the first big-screen team-up of the iconic star Nora Aunor, and international filmfest gem Brillante Mendoza. We hope that their movie together, “Thy Womb,” will be truly significant and end up as one of the film year’s finest achievements.

On TV, we’re intrigued by the theme and plot premise of the new teleserye, “Lorenzo’s Time,” which casts Zaijan Jaranilla as a boy stricken with progeria, a rare disease that makes him age much faster than usual so he becomes an old man while still in his chronological childhood.

All sorts of issues related to life and death can come under the drama series’ thoughtful purview, so we trust that it will live up to its promise as well!