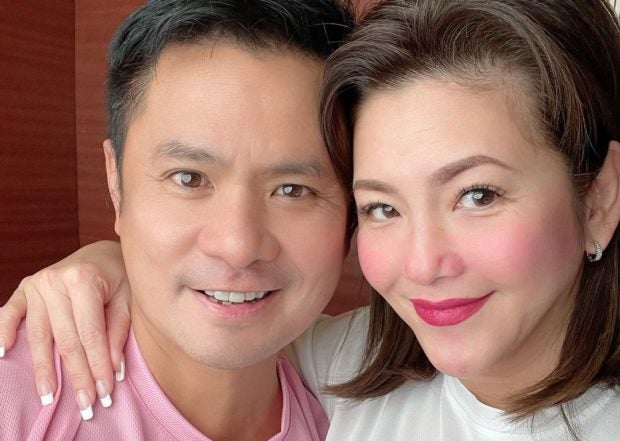 Regine Velasquez came to her husband Ogie Alcasid’s defense after some netizens blamed him when she accidentally fell during a performance.

Alcasid told fans about the incident as he assured them that his wife and fellow singer is safe, via Twitter post yesterday, Oct. 6.

“[Thank you] lord! Glad wifey is safe. She lost her balance while we were doing a spiel during a performance for the [birthday] of the father of Jhong Hilario,” he said.

Neither Alcasid nor Velasquez disclosed more details about the fall though Velasquez poked fun at her onstage fails including her slipping and falling onstage, as seen in her Instagram post, also yesterday.

Ty lord!!! Glad wifey is safe. She lost her balance while we were doing a spiel during a performance for the bday of the Father of @jhongsample 🙏🙏🙏 she is ok and safe.🥰🥰🥰

While Velasquez appears to be taking the incident all in good fun, one @_notfernandez on Twitter criticized  Alcasid, saying he could have “acted faster” to prevent Velasquez from falling down.

“No one’s putting the blame on him, ang amin lang is (for us), it should’ve been avoided if he was fast enough to catch [her],” the netizen said. “If he acted faster, he could’ve caught her before she fell [to] the ground. He could’ve dropped the things he was holding, and rushed to her.”

Velasquez then responded to the netizen, stressing that “everything happened so fast,” as per her post on Twitter yesterday.

“You guys have to STOP blaming him and yes YOU are blaming him,” Velasquez added.

Velasquez then expressed disappointment over those who seemingly pretend to care about her, via Twitter post, also yesterday.

“By the way nakakapagud na ‘yung mga taong nag papangap na (I am getting tired of people who pretend that) ‘we care about her’ and yet continues to wish my relationship with MY HUSBAND to fail. I don’t understand anymore,” she said.

By the way nakakapagud na yung mga taong nag papangap na “we care about her” and yet continues to wish my relationship with MY HUSBAND to fail 😱 I don’t understand anymore. Well I guess block kiti block na lang ako. Hay 😰

Velasquez and Alcasid have been married since 2010. They have a son together, Nate, who they welcomed a year after they tied the knot.  /ra