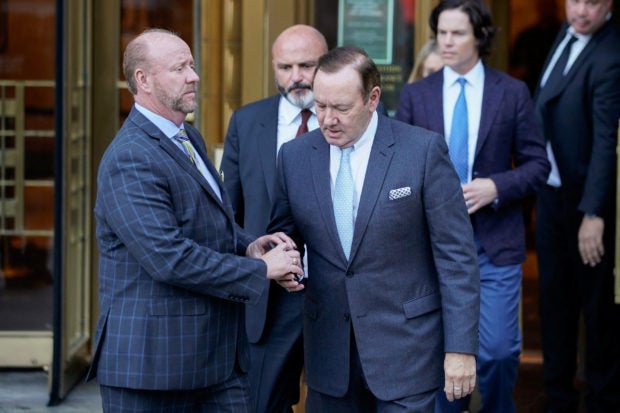 NEW YORK—Lawyers for the actor Kevin Spacey and Anthony Rapp, the man whose accusations of sexual misconduct upended the Oscar winner’s career, traded dueling accounts on Thursday about the men’s encounters more than 30 years ago as a civil trial over Rapp’s claims began in New York.

A lawyer for Rapp, who is seeking $40 million (about P2.35 billion) in damages, said in his opening statement that Spacey, then 26, drunkenly lifted Rapp onto a bed and climbed on top of him at a party at Spacey’s New York apartment in 1986. Rapp was a 14-year-old actor just starting his own Broadway career at the time.

Rapp managed to “wriggle out” and left, but not without Spacey following him to the front door and asking, “Are you sure you want to go?” Peter Saghir, Rapp’s lawyer, told jurors in Manhattan federal court.

“Kevin Spacey is a fantastic actor, no doubt about that,” Saghir said. “Every time Anthony hears that, hears Kevin Spacey’s name, he’s back in that apartment in 1986.”

Spacey, 63, has denied Rapp’s accusations and other sexual misconduct charges.

Best known for starring in the Broadway musical “Rent,” Rapp described his encounter with Spacey in an interview with BuzzFeed in late 2017 at the height of the #MeToo movement, which encouraged people to speak out about sexual abuse at the hands of famous and powerful people.

Spacey’s lawyer, Jennifer Keller, said Rapp made up the story because he was jealous his own acting career was not as successful as Spacey’s. She said his description of the alleged encounter resembled a scene in the play Rapp was acting in at the time.

“He’s been telling this story for attention, for sympathy, and to raise his own profile,” Keller said. “He never became the international star that Kevin Spacey is… he has been simmering and simmering with resentment all along.”

Spacey won Oscars for best actor in “American Beauty” and best supporting actor in “The Usual Suspects,” but his career largely ended after more than 20 men accused him of sexual misconduct.

Netflix dropped him from its political drama “House of Cards,” and Christopher Plummer replaced him in the role of J. Paul Getty in “All the Money in the World” just a few weeks before the movie’s scheduled release.

Spacey faces a criminal trial in London next year after pleading not guilty to five sex offense charges over alleged assaults between 2005 and 2013.

He was charged with indecent assault in Massachusetts in 2018 over allegations he sexually abused an 18-year-old man at a Nantucket bar in 2016, but prosecutors later dropped the charges after the alleged victim refused to testify. DC/RA

TAGS: "All the Money in the World", Anthony Rapp, House of Cards, Kevin Spacey, sexual misconduct