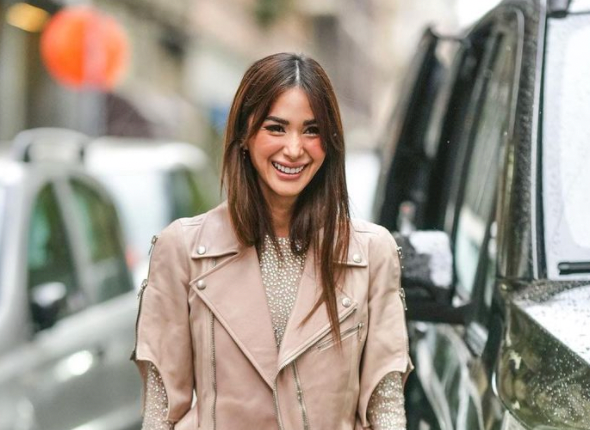 Heart Evangelista, who is currently in Paris, revealed that she bought a new apartment and noted that she will be staying abroad “indefinitely,” amid her rumored split with husband, Sen. Francis “Chiz” Escudero.

The actress disclosed this after she was asked by a netizen to name the things she purchased recently, during Evangelista’s Instagram live last Wednesday, Sept. 28. The video has since expired on her Instagram page but it was re-uploaded by fan accounts on social media.

“I just got myself an apartment so I don’t really plan to buy anything else because I have all [these] nice furniture [so] I am saving up for that,” she said.

Evangelista also spoke about her work commitments in Paris, adding she “does not mind” not being in the Philippines for a long time.

“It’s really a full job and I’ve never really been the type to stay home and wait. I’m very creative with my time and I like to be very productive with my time,” she stated. “I’m a working girl and I’m not ‘Ms. Hingi.'”

Evangelista then admitted missing her fans in the country but she explained “everybody has to work.”

“I miss all of you but dito muna ako (I am going to stay here for a while),” she told fans. “Hindi muna ako babalik.” (I am not returning [to the Philippines] for some time.)

At the latter part of the video, Evangelista read a question that asked, “When will you come home?” — to which she answered by quoting Julia Roberts’ line in the 1999 film “Notting Hill”— “Indefinitely.”

Evangelista recently hinted about building a home in Paris, although it was not immediately stated if it is the same apartment the actress recently bought.

Meanwhile, speculations that Evangelista and Escudero have separated arose after fans noticed that she removed the surname Escudero from her Instagram profile name. Evangelista later admitted she has been dealing with “personal struggles,” although she did not state anything specifically.

The actress has also reportedly moved out of her shared home with Escudero and is now living in a condo unit, as per entertainment columnist Cristy Fermin. EDV

‘Our Lady Heart Evangelista’ grants prayers of women who got replaced, cheated on by their husbands