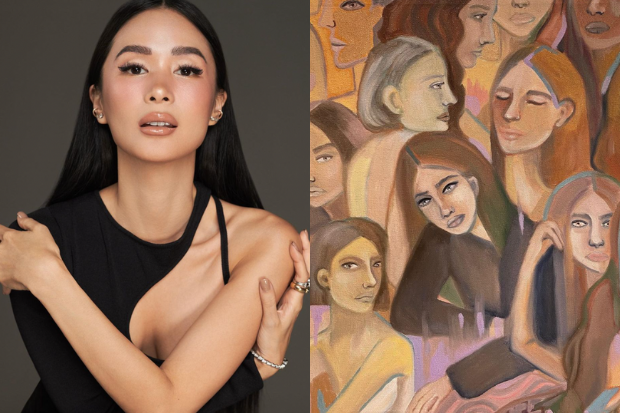 Heart Evangelista has intrigued some fans after she dropped a cryptic quote about creating “one’s own world” along with one of her paintings.

The actress made the cryptic remark while showing a painting that features portraits of several women in various moods and poses, via her Instagram page yesterday, Sept. 21.

“To create one’s own world takes courage,” she said, opting not to elaborate on the quote.

This is not the first time Evangelista showed off the painting, as she earlier posted it on her art Instagram account (@iamhearte.art) last Aug. 21.

Fans sent comforting words to Evangelista, with some cheering her on and others pointing out the “sad eyes” in the portraits she painted.

“You’re young and you can definitely make it on your own,” one @evelyncorpuzcruz told Evangelista.

“Those sad eyes in the middle. [Hang] on, Hearty,” another netizen, @hellomytch, said to the actress.

“Those are sad eyes, love,” one @ifiwereheather stated.

This comes amid rumors that Evangelista and her husband Sen. Francis “Chiz” Escudero have split. Speculations on the matter started as early as last month, when fans noticed that the actress had removed the Escudero surname from her Instagram profile name.

The actress admitted earlier this month that she was dealing with “personal struggles.” She was later seen crying during a photo shoot, though she did not state any specific “struggle” or reason behind her tears.

Evangelista then seemingly hinted at building her dream home when she posed for the September issue of L’Officiel magazine.

Meanwhile, columnist Cristy Fermin stated in her vlog earlier this week that Evangelista had moved out of the home she shared with Escudero and is now living in a condominium unit.

Evangelista and Escudero, who got married in Balesin in 2015, are yet to speak up on the breakup rumors hounding them, as of this writing.  /ra

Heart Evangelista moves out of home shared with Chiz Escudero?