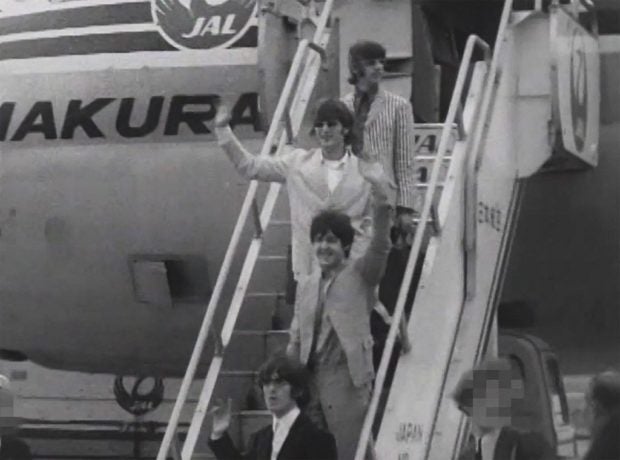 This handout taken on July 3, 1966 and released to AFP on October 3, 2022 by the Metropolitan Police Department via Freedom of Information Citizen Center shows The Beatles, (top to bottom) Ringo Starr, John Lennon, Paul McCartney and George Harrison waving as the leave Tokyo at the end of their 1966 Japan Tour. (Photo by Handout / various sources / AFP)

TOKYO — Beatles fans have hailed the release of never-before-seen footage showing the Fab Four on tour in Japan, following a fierce court battle over the 35-minute video.

The silent black-and-white footage of the British band’s only visit to the country in 1966 was recorded by police as a security measure.

It shows the musicians descending from a plane in matching kimonos and performing to a rapturous crowd at the Budokan arena in Tokyo, as well as behind-the-scenes police operations.

The footage has a noticeable quirk, however: the faces of everyone except the Beatles — from crying admirers to officers facing off with right-wingers protesting the tour — have been pixelated for privacy reasons. 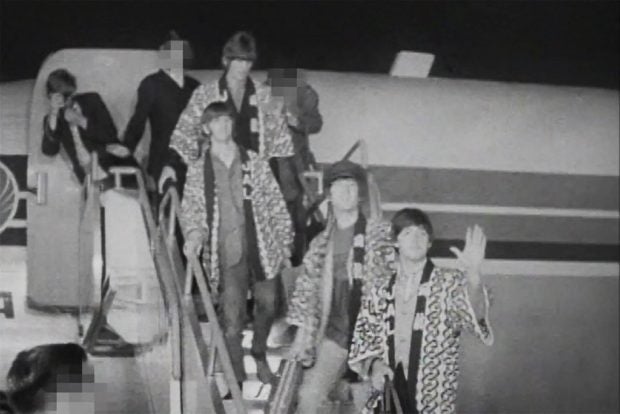 Beatles fans on October 3, 2022 have hailed the release of never-before-seen footage showing the Fab Four on tour in Japan, following a lengthy court battle over the 35-minute video. (Photo by Handout / various sources / AFP)

This had been a key sticking point for fans and freedom-of-information advocates, who fought a long and winding battle demanding that the footage remain uncensored.

They took their case all the way to Japan’s Supreme Court, arguing that the video was a “historical document” and pleading for authorities to simply let it be.

However, the top court rejected the case in 2018, and the footage was released late last month after four painstaking years of pixelation work, said Satoshi Shinkai, head of the civic group that fought the legal battle with authorities.

“The film has come to light for the first time ever… I’m sure Beatles scholars and fans across the world will pay close attention to it,” Shinkai, himself a Beatles fan, told AFP on Monday.

The Beatles remain hugely popular in Japan but toured the country only once, playing five concerts, and were trailed by legions of screaming fans.

Police provided the heavily edited clips to Shinkai’s group, which campaigns for freer information disclosure and has posted the footage publicly on YouTube.

The group had argued that it was almost impossible to identify people in the footage more than 50 years on.

The face pixelation points to Japan’s “backwards mindset” regarding information disclosure and its “hidebound views on culture,” said Shinkai, who is also a lawyer.

Bootleg Beatles is coming back to Manila this October

Beatles and John Lennon items to be made available as NFTs