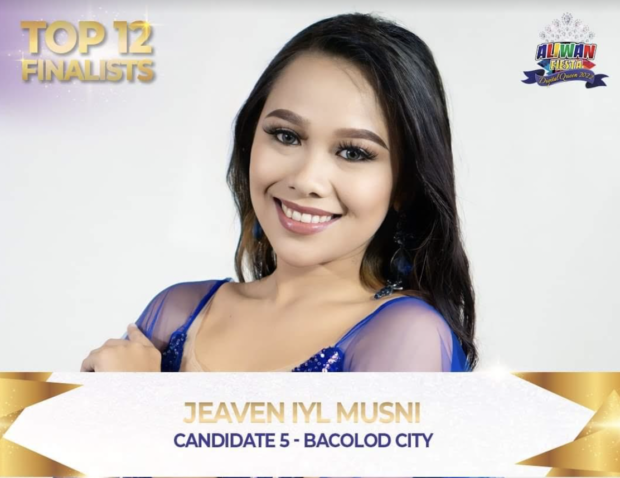 Jeaven Iyl Musni of Bacolod City is now in the top 12 of AFDQ 2022. Image: Aliwan Fiesta

MANILA, Philippines — Just a little over a week after announcing the top 12 finalists for this year’s search for the next Aliwan Fiesta Digital Queen (AFDQ), organizer Manila Broadcasting Co. (MBC) announced a new candidate, replacing a previous one who withdrew from the competition.

MBC PR consultant Susan Isorena-Arcega told the Inquirer in an interview, “Raven Doctor of Palawan has withdrawn. She will be replaced by Jeaven Musni of Bacolod.”

Musni’s inclusion in the roster of top 12 finalists has also been posted on the official Aliwan Fiesta Facebook page, and a new composite image of the qualifiers already includes her name and head shot.

Arcega also shared with the Inquirer the virtual contest’s calendar, enumerating the events that will take place after the three-episode primer “Journey to the Crown” which premiered on Sept. 17. The competition legs will be streamed for five consecutive Saturdays, starting with “Pride of Place” on Oct. 8, followed by the Talent Competition on Oct. 15.

“Queens for a Cause” is scheduled on Oct. 22, while the Evening Gown Competition and Question-and-Answer segment will be on Oct. 29. The final competition will be on Nov. 8, where the new Aliwan Fiesta Digital Queen will be announced. Shanyl Kayle Hofer of Minglanilla, Cebu, will virtually relinquish her title to her successor.

The winner will receive P50,000 in cash, with an equivalent amount going to her chosen charity program. She will also have a paid vacation for two at Feliz Hotel Boracay, inclusive of airfare and pocket money. The pageant’s sponsors will also provide gifts for the new queen.

The third and last episode of “Journey to the Crown” will be on Oct. 1, featuring beauty queenmaker Rodgil Flores.

All primer episodes, as well as the competition legs, including the finals, will be streamed on the digital platforms of all MBC stations and the official Aliwan Fiesta Facebook page. A delayed telecast will be aired via on DZRH TV. JB