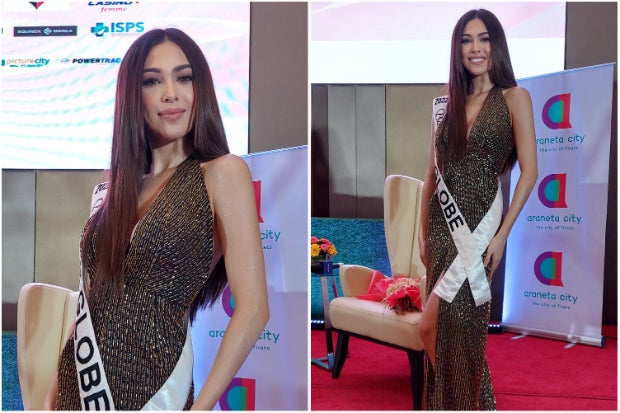 MANILA, Philippines — Chelsea Fernandez has been Tacloban City’s delegate in national beauty pageants for years. And her prayer to carry the “Philippines” sash across her body on an international stage has finally been granted when she received the Binibining Pilipinas Globe crown in July.

But her upcoming assignment abroad has an even heavier weight than others because she will attempt a second consecutive win for the country in the Miss Globe pageant. Reigning Miss Globe is Bb. Pilipinas Maureen Montagne, and Fernandez hopes to inherit the international crown from her when the 2022 pageant concludes in Tirana, Albania, on Oct. 15 (Oct. 16 in Manila).

“Back-to-back is hard, but not impossible,” the Taclobanon lass said at the Bb. Pilipinas send-off program for her and two other delegates held at the Novotel Manila Araneta City in Quezon City on Sept. 19.

The national pageant organization also sent off Bb. Pilipinas Intercontinental Gabrielle Basiano who is headed to Egypt for the 2022 Miss Intercontinental pageant on Oct. 14 (Oct. 15 in Manila), and Bb. Pilipinas Grand International Roberta Tamondong who will fly to Indonesia for the 2022 Miss Grand International contest on Oct. 25.

Fernandez told the Inquirer at the sidelines that the Filipino people may expect her to be “fiercer and stronger” now.

She said she still held back when she competed in Bb. Pilipinas. But if she still had fear when she got on the national pageant stage, winning the title gave her strength.

“I gained faith in myself. I told myself, ‘you can do it, you’re just doubting yourself,’” Fernandez said. She and Montagne had not spoken more intimately about the Miss Globe pageant yet, but Fernandez said she learned from her Bb. Pilipinas predecessor how to be kind.

She revealed that after her coronation in July, August was devoted to media interviews and appearances, and some charity works. She was only able to really buckle down to her international pageant preparation in September. And just this week, she had her homecoming in Tacloban City.

Fernandez, meanwhile, shared that her competition wardrobe is already complete: “We had a photoshoot yesterday for my OOTDs (outfit of the day), for gown, and costume.”

And because she gets cold easily, Fernandez said her OOTDs will include jackets, especially because the weather in Albania in October will be too freezing for her.

Fernandez has an impressive local and national pageant resumé. In 2017, she was crowned Miss Tacloban, then went on to win Reyna ng Aliwan in 2018. In 2019, she took home the Miss Philippines Water title in the Miss Philippines Earth pageant, then won the Miss Bikini Philippines crown in the pageant’s virtual edition in 2020. She also became the national director of the 2021 Miss FIT Philippines pageant. JB

Read Next
Ruffa Gutierrez clarifies she can ‘work with everyone’ amid rumored transfer to ALLTV
EDITORS' PICK
Reignite your passion with the vivo Y35
Karding damage to infrastructure at P23M
Bongbong Marcos says PH ‘open for business’ with new Clark Airport terminal
House energy committee chair Arroyo bats for cheap electricity
UNFPA Philippines Career Opportunities
Sierra Madre stands up to Karding, but needs protection vs the humans it saves
MOST READ
Angelica Panganiban ‘duguan, sugatang mom’ one week into breastfeeding
Badoy not with Office of the President, NTF-Elcac, under Marcos admin — solon
Cop yields after killing wife, companion in Oriental Mindoro
LPA enters PAR, may develop into tropical depression
Don't miss out on the latest news and information.