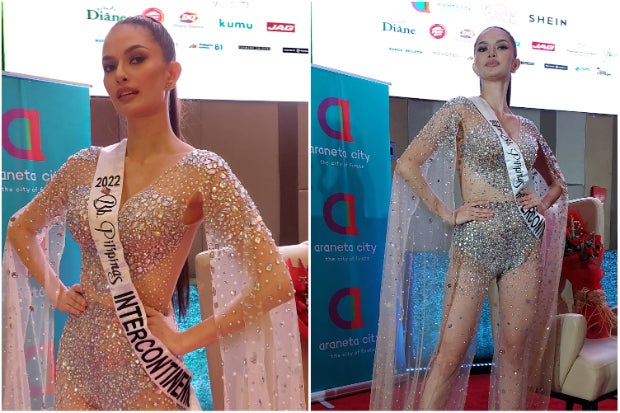 MANILA, Philippines — When the Binibining Pilipinas queens of 2022 arrived for the send-off program for three of the ladies competing next month, all of them wore lavish gowns fit for the red carpet, except for one.

Bb. Pilipinas Intercontinental Gabrielle Basiano paraded in a sheer, nude jumpsuit embellished with crystals with cape-like sleeves that dragged on the floor. It was a showstopping moment that has been the signature of the lady adjudged “Best in Long Gown” in the national pageant’s two most recent editions.

The 2021 first runner-up earned the moniker “pasabog queen” for the unconventional gowns she so magnificently carried on the Bb. Pilipinas pageant stage for two straight years, with the first one sporting an attached veil made out of pearl-like beads, while the other one had a matching “salakot.”

And her outfit at the send-off program held at the Novotel Manila Araneta City in Quezon City on Sept. 19 was no exception.

“These (pointing to her sleeves)? Since we’re heading to Egypt, this is my subtle way of saying ‘Egypt, I’m on my way,’” she told the Inquirer at the sidelines of the event.

She shared that it was her team’s decision to make her wear something that’s out of the box.

Basiano is aiming to make the Philippines score back-to-back wins at the 50th Miss Intercontinental pageant which will be held at the Sharm El Sheik in Egypt on Oct. 14 (Oct. 15 in Manila), and inherit the crown currently held by her former Bb. Pilipinas batchmate Cinderella Faye Obeñita.

She said the reigning intercontinental queen told her to enjoy and be herself: “She also said that I can win. So I’m holding on to that. Those words of her are my motivation.”

The current Filipino representative said what she admires most about Obeñita is her trust in her own capabilities.

“We all know that not everyone thought she would win, but she did not allow herself to be defeated by those words,” Basiano said.

Since the time of her coronation in July, Basiano got busy not only with her preparations, but also with media interviews and her queen duties with the Bb. Pilipinas Charities Inc.

“I can’t believe I was able to squeeze in so much in just two months. I felt I became a robot,” she kidded.

But after everything that she has gone through, Basiano said she became more open to opinions and other people’s suggestions for her quest to keep the Miss Intercontinental crown with the Philippines.

“I’ll be giving my best. So please, pray for me,” she appealed. JB