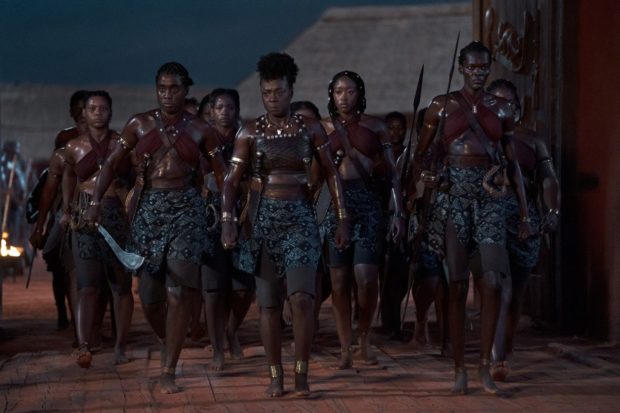 “The Woman King,” loosely based on a true historical episode, stars Oscar-winner Viola Davis as the fierce general who leads an army known as the Agojie as it protects the 18th-century kingdom of Dahomey. Image: CTMG via AFP

“The Woman King,” an epic about an all-female army of African warriors, easily topped the North American box office this weekend with an estimated take of $19 million, industry watcher Exhibitor Relations reported Sunday.

The new Sony release, loosely based on a true historical episode, stars Oscar-winner Viola Davis as the fierce general who leads an army known as the Agojie as it protects the 18th-century kingdom of Dahomey.

Days earlier, Davis told AFP that she felt “conflicted” because if the Black-led, woman-dominated film fell short, it would unfairly damage the prospects for future such endeavors.

Instead, boosted by a favorable critical reception — “Reviews are sensational,” said the FranchiseRe website —  it exceeded analysts’ expectations, more than tripling the ticket sales of the next-highest finisher, 20th Century’s “Barbarian.”

That horror film tells the story of a woman (Georgina Campbell) who checks into an AirBnB rental in a sketchy Detroit neighborhood only to find it has also been booked by an oh-so-creepy Bill Skarsgard. “Barbarian” took in $6.3 million for the Friday-through-Sunday period.

In third place was a slasher film, “Pearl,” a new low-budget release from A24, with ticket sales just over $3.1 million. Mia Goth stars in a blood-soaked tale that involves the brutal use of both an axe and a pitchfork, on animals and humans. Enough said.

Searchlight’s comic mystery “See How They Run” placed fourth in its opening weekend, at $3.1 million.

Sam Rockwell stars as an often-inebriated Scotland Yard detective, Saoirse Ronan as his eager but hapless assistant, and Adrien Brody as a sleazy Hollywood director in London to make a film version of Agatha Christie classic “The Mousetrap,” until fate intervenes.