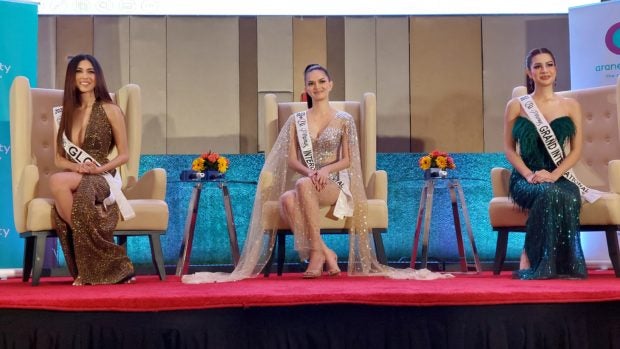 MANILA, Philippines — Just a couple of months after staging its grand coronation night in July, the Binibining Pilipinas Charities Inc. (Inc.) is now deploying three of its crowned queens, on whose shoulders rest the tough task of sustaining the country’s reputation as a global pageant powerhouse.

The national organization held a send-off party for the country’s delegates at the Novotel Manila Araneta City a rainy afternoon on Sept. 19.

She will head to Egypt for the Miss Intercontinental pageant, whose reigning queen is Bb. Pilipinas Cinderella Faye Obeñita. The finals will be held on Oct. 14 (Oct. 15 in Manila).

A day after Basiano’s competition, Bb. Pilipinas Globe Chelsea Fernandez will find herself defending for the Philippines the Miss Globe crown resting on the head of her national pageant predecessor Maureen Montagne.

The 2022 Miss Globe pageant will take place in Albania on Oct. 15 (Oct. 16 in Manila), and Fernandez will bring with her there a wealth of experiences in the national pageant scene, having captured multiple crowns in various nationwide competitions other than the Bb. Pilipinas pageant.

Bb. Pilipinas Grand International Roberta Tamondong is not eyeing back-to-back wins for the country in her global assignment, but her mission is just as daunting.

No Filipino woman has won in the Miss Grand International pageant, and the teenage queen hopes to become the first from the Philippines to bring home the “golden crown.”

A seasoned beauty queen even at a young age, bringing home the country’s first win in a global tilt is not new to Tamondong.

In 2020, even as the world is battling the COVID-19 pandemic, Tamondong won the Miss Eco Teen International title, making her the first Filipino woman to do so.

The 2022 Miss Grand International pageant will be held in Indonesia on Oct. 25.

These tall ladies have received their respective tall orders for next month, but they all promised to give their best not to disappoint the most vibrant pageant fans in the world.

Behind them is BPCI, a successful national pageant organization in the Philippines, with multiple international titleholders, several runners-up, and dozens of semifinalists from the most prestigious competitions in the world. JB