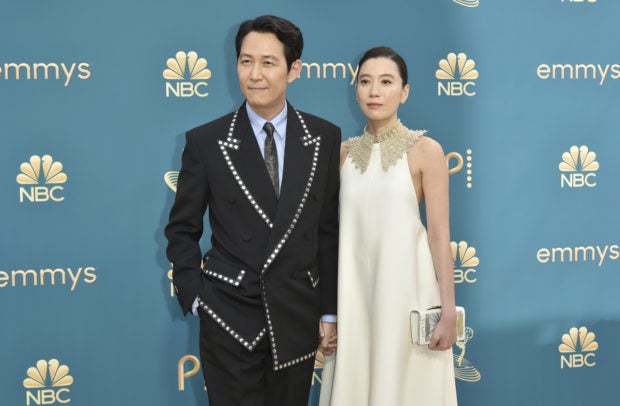 Lee Jung-Jae (left) and Lim Se-ryung arrive at the 74th Primetime Emmy Awards on Monday, Sept. 12, at the Microsoft Theater in Los Angeles. Image: Associated Press via The Korea Herald

Actor Lee Jung-Jae’s win of the Emmy award for his role in the Netflix-original series “Squid Game” on Monday created a buzz worldwide but there was someone else who shared the limelight with him — his longtime girlfriend Lim Se-ryung.

Sporting a white Dior dress, she hit the red carpet hand-in-hand with the actor in Los Angeles.

Lim, 45, is by no means just a celebrity’s girlfriend.

She is the vice chairman of Daesang Group, one of the largest food conglomerates in South Korea, and the ex-wife of Samsung Group’s de-facto chief — Samsung Electronics vice chairman Lee Jae-yong.

Lim and the actor Lee made their relationship official in 2015 when their dating was first spotted by media. The couple walked the red carpet together at the Cannes Film Festival earlier this year.

Maintaining the relationship solid for eight years, the “Squid Game” star expressed his appreciation to Lim by including her name in the ending credits of his directorial debut “Hunt.” The movie has attracted 4.3 million viewers since its opening on Aug. 10.

Born as the eldest daughter of Daesang Group chairman Lim Chang-wook, the junior Lim married Samsung’s Lee in 1998 and divorced in 2009. They have one daughter and one son. AP/JB