The princess versus the young stepmother | Inquirer Entertainment

The princess versus the young stepmother 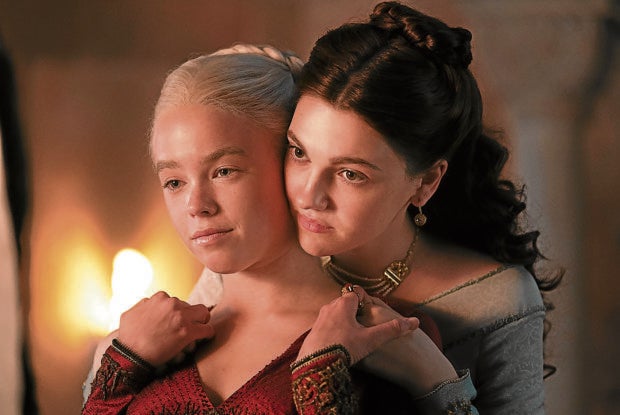 Scene from “House of the Dragon” —PHOTOS COURTESY OF HBO GO

The “Game of Thrones” prequel “House of the Dragon” has a lot of carefully limned characters that are made more compelling by the way they interact with one another.

But the teenage girls’ friendship is put to the test when Otto Hightower (Rhys Ifans) pushes his daughter into the arms of the grieving monarch.

“At the beginning of the series, we find Alicent as a very naïve young girl—naive in an emotional sense, not in a political sense,” said 19-year-old Emily when asked to describe her character at the recent roundtable that we attended. “She’s very acutely aware of where she sits in this world that we find her in. She’s very observant. She’s a strict rule follower.

“At the time, Alicent is put in a box, although doesn’t mind it because she’s quite happy where she is. She does what she’s supposed to. But when the story progresses, that characteristic changes.”

For her part, Milly, who’s 22, said that both Rhaenyra and Alicent are initially seen by viewers at a happy point in their lives. “Rhaenyra just goes through the motions of being a young woman in a high position of privilege. We meet her before everything in her life falls apart and it’s that shift that the show explores thereafter.”

Another interesting element in Rhaenyra and Alicent’s relationship is the depth by which their interaction is explored. They aren’t just shown as women with varying degrees of strengths, but as increasingly powerful figures who might eventually go to war with one another.

“It’s amazing to be in a show that explores women not just as individuals, but also their relationships with one another,” Emily stated. “I always say that one of my favorite parts about this series is that it does explore misogyny—I mean, part of its entire premise is, should a woman sit on the Iron Throne?

“But away from that storyline, these women are also complex characters who have other things going on in their lives. As a viewer, Rhaenyra is one of the most interesting characters I’ve ever seen onscreen because you can see that there’s so much to her.

“As an actor, it feels the same way to be able to play Alicent. There are so many layers to her. And I don’t think we have enough shows that explore women in that depth. Moreover, the relationship between them, whether it’s platonic, romantic or whatever it might be, is one of the most intricate relationships you can watch onscreen.” 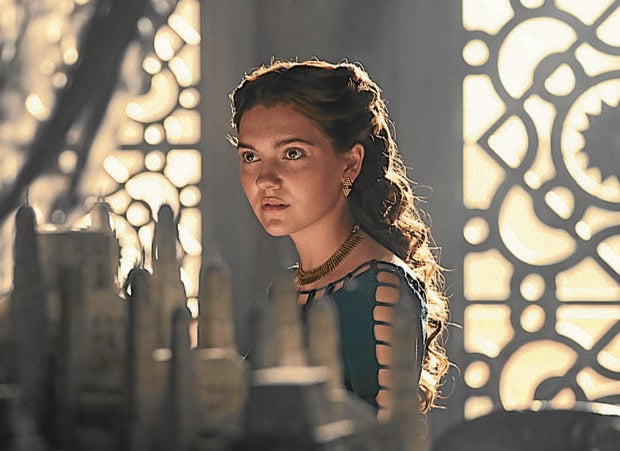 Milly pointed out that it could sometimes get a bit ironic to talk about Alicent and Rhaenyra’s relationship in the context of how men feel about them. “We have to remind ourselves that we’re watching this story because these two people lead very interesting lives,” she noted. “We want to hear their stories, regardless of their gender.

“I hope that young boys adore these female characters as much as women do because for me, it’s even more important to have a young boy come up to me and say, ‘I see myself in you’ or ‘I see my sister or mother in you.’”

Ultimately, both actresses think that part of the reason behind the successes of “Game of Thrones” and “House of the Dragon” is the franchise’s ability to tell good stories.

“Other than being an actor, I love calling myself a storyteller,” Emily explained. “Anybody who works in the creative industry is out there to tell a story. We, as human beings, we crave escapism. This series may be fantasy, but it appeals to a lot of people because it feels so grounded, so real and truthful. It has the ability to take you places and make you feel you’re watching real people.

“One of my favorite things about being an actor is the ability to provoke feelings in others—it’s a magical thing.”

For Milly, the ability to express emotions that are hard to explain is another thing that she loves about her job as an actor.“Sometimes, I don’t know how to say something that needs to be said,” she shared. “It’s like how you send someone a song to express all the things you can’t say. Because there’s something in it that kind of hits your soul when you listen to it… something that replicates an exact feeling that you’re trying to seek out.” 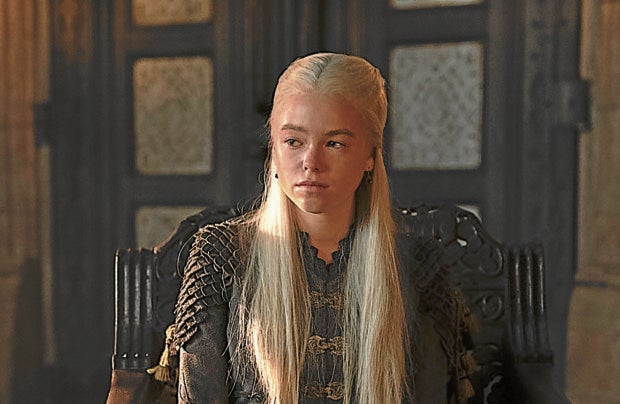 Our Q&A with Milly and Emily:

It’s a huge production that can be life-changing for new actors. What was the hardest thing that you had to do during this whole experience?

Milly: The hardest and most challenging wasn’t even the work. It was the literal thing that was demanded of me—which was to leave my home in Australia, move across the world during a pandemic to a city where I didn’t know anyone. I was pretty much alone, but I was very fortunate to be around such an incredible cast and crew.

Emily: For me, it was the scale and the pressure of the show in general. Like Alicent, I’m a very anxious person. So stepping onto a set where you’re constantly reminded, not by people but just by stepping onto it, how mammoth the show is.

That was the biggest pressure that I put on myself—to get over the wall in my own brain. But we were surrounded by supportive people who were all going through this similar experience in very different ways. And we relied on each other. But it does change your life overnight.

Did you use the girls’ evolving relationship as a mirror to develop your own character? Because, even in the first episode, we see how entangled they are in each other’s lives and feelings.

Emily: Yes, 100 percent. Like a mirror, they reflect the best and worst in each other. They really learn a lot from one another as the series goes on and we see them growing further apart.

Milly: We also see how that change is reflected in our older counterparts (Emma D’Arcy as Rhaenyra, Olivia Cooke as Alicent). When you’re younger, you don’t know how to cope or deal with what it feels when someone has something that you want but you can’t have, or if they’re better than you, or if you’re jealous of the other. We see how these two characters deal with this dynamic throughout their relationship—and that’s what makes it so heartbreaking.

Milly, it was great to see you riding your yellow-scaled she-dragon Syrax. What was it like shooting that sequence behind the scenes?

Milly: I don’t want to disappoint people, but it was just like going on a ride (laughs). It was one of my favorite days on set because it isn’t something you experience with a lot of people. I mean, it was literally just me, alone on a big soundstage and getting lifted up with four men running around, with leaf blowers in my face. But once you’re up there, it’s incredibly fun.

Could you talk about your favorite costume from the first season’s early episodes?

Emily: It’s that green dress from Episode 1 that I wear to meet King Viserys. It was a special moment for Alicent in the sense that it’s her mother’s dress—which could be seen in a multitude of lights. She’s this child who’s suddenly put in a very adult dress and of course it has a lot of connotations to it, story-wise.

It’s a very powerful moment. Wearing it for the first time, I felt fully immersed in the character. All of the feelings that Alicent was supposed to be feeling came very organically just from putting the dress on. And once you step on the set, everything just falls into place very naturally.

Milly: For me, it’s the one that we first see her in—the dragon-riding costume. Every time I think of Rhaenyra, I see her in that outfit. Our amazing costume designer made it a point of adding dragon elements into my costumes, so I’ve got dragon scales on my shoulders and elbows, which was incredible!

It’s a massive undertaking that was understandably shrouded in secrecy. How difficult was it for you not being able to talk about HOTD to friends and family wanting to know what’s happening?

Emily: It was so difficult to keep it a secret (laughs)! Even after we got announced [as members of the cast], I’d have my friends asking me about it for months, but it was just top secret! “Top secret” doesn’t even cut it, like you couldn’t tell them where you were working!

Milly: It’s like an MI5 situation! I was scared a black car would come in and I would get whisked away and never be seen again (laughs). At the time, I was working at this restaurant, washing dishes and I was like, “I have to quit my job and move to London.” And they’d say, “What do you mean ‘move to London’? During a pandemic?” Yeah, keeping it a secret was wild.

Episode 4 of “House of the Dragon” will be streamed on HBO Go beginning tomorrow.

TAGS: Game of Thrones, HBO GO, House of the Dragon