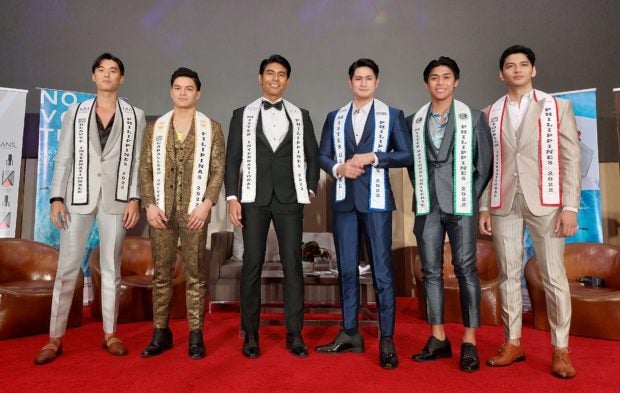 MANILA, Philippines — Six men from the Mister International Philippines stable will head out to different global contests to represent the country, and hopefully bring home titles from their respective competitions.

Before the staging of the national pageant’s coronation ceremony, MIPH already announced that two runners up will be sent to their own international competitions. In August, two more runners-up received their respective global assignments, while a finalist was announced as another Philippine representative abroad earlier this month.

The two gentlemen’s international assignments were made known during the coronation ceremony in June as they were proclaimed runners-up.

In August, MIPH also announced that 3rd runner-up Kitt Cortez and 4th runner-up Andre Cue will be sent abroad to represent the Philippines in international competitions in November.

MIPH also appointed Cue as Mister Teen International Philippines in July. The organization’s president, lawyer Manuel Deldio, told the Inquirer that in the event where he brings home the Caballero Universal title from Venezuela, he will no longer take part in the international contest for teenagers scheduled in Laos in June 2023.

Earlier this month, MIPH announced that it has also secured the license for the inaugural edition of the Miss and Mister Beauté International pageant in Turkey, and designated top 10 finalist John Ernest Tanting as the country’s representative in the contest’s male division. He finished sixth overall in the national competition, the national pageant’s spokesperson Norman Tinio told the Inquirer.

MIPH will hold auditions this month for Tanting’s female counterpart for the Istanbul-based pageant scheduled in November. JB